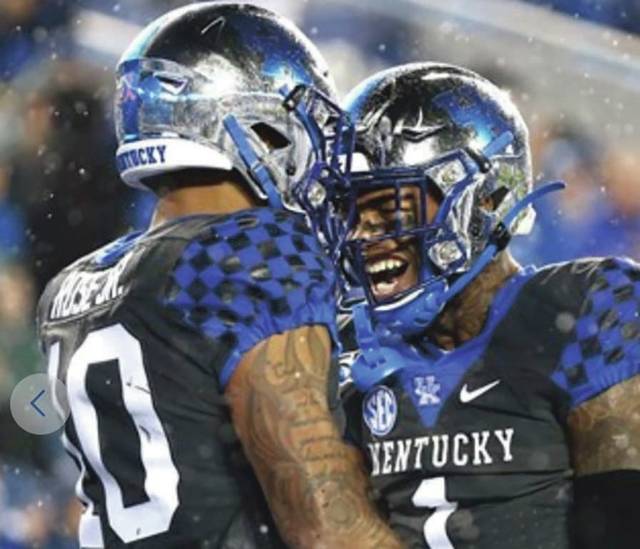 Kentucky quarterback Lynn Bowden celebrated a touchdown with teammate A.J. Rose in the Wildcats’ 29-7 win over Missouri on Saturday night.

LEXINGTON (KT) — Not even a driving rainstorm could stop Lynn Bowden Jr.

The Kentucky junior quarterback rushed for 204 yards and two touchdowns to lead the Wildcats to a 29-7 victory over Saturday night. Bowden’s performance was impressive considering a steady rain that soaked Kroger Field.

“What can you say about Lynn?” Kentucky coach Mark Stoops said. “Amazing. So tough. So tough and talented. If the weather had been clear like in the first half I felt he would have thrown the ball well. We had some opprotunities in the pass game because he is so dynamic in the run game. It was tough out there. It was really coming down.”

Since taking over for injured starter Sawyer Smith three weeks ago, Bowden has guided the Wildcats (4-4, 2-4 Southeastern Conference) to two victories in three games, moving Kentucky within two wins of obtaining bowl eligibility with four games remaining in the regular season.

Stoops said Smith is close to 100 percent, but didn’t want to take a chance and wanted to give him more time to heal for the final month of the season.

“The conditions made it hard to take (Bowden) out,” Stoops said. “Sawyer is getting better and nice to have option to go with both guys. The rain was like playing with 12 tonight. They were loading up and he was still able to go.”

Coming off the team’s first shutout loss of the Stoops era — a 21-0 loss at No. 10 Georgia last week — the Wildcats rebounded impressively against the Tigers and held Missouri scoreless in the first half. Kentucky used a grinding run game to wear down Missouri, rushing for 297 yards, with most of that yardage attained by Bowden.

Bowden has rushed for 499 yards and four touchdowns in the past three games and has gained the respect of his teammates. Already a threat as a receiver as well as a kickoff and punt return specialist, Bowden has proven to be even more dangerous at quarterback and has given Kentucky’s past three opponents, especially Arkansas and Missouri, fits with his speed and elusiveness. He kept Georgia off-balance with 99 rushing yards last week during a downpour in Athens.

Bowden has two of the SEC’s three individual best rushing games with 196 against Arkansas and 204 against Missouri.

“Just show me somebody better defensively and sure enough he won all the awards,” Stoops said. “I say the same thing about Lynn, I’d like to see someone tougher than Lynn.”

The ability of Bowden to step in and give the Wildcats a cushion has put Kentucky in position to reach the postseason for the fourth straight season under Stoops. The Wildcats lost returning starter Terry Wilson following the second game of the year and Kentucky’s offense took another hit after Smith needed time to recover after getting bruised and battered in a 29-21 loss to Florida on Sept. 14. Smith wasn’t effective the following week in a 24-7 setback at South Carolina.

That’s when Bowden stepped in and provided stability in the pocket and the Wildcats needed him the most and Bowden said he would “have laughed” if he was told he would be the team’s starting quarterback this season.

“I stayed prepared at all times,” he said. “I’m a playmaker and do what I need too.”

He did just that against the Tigers.