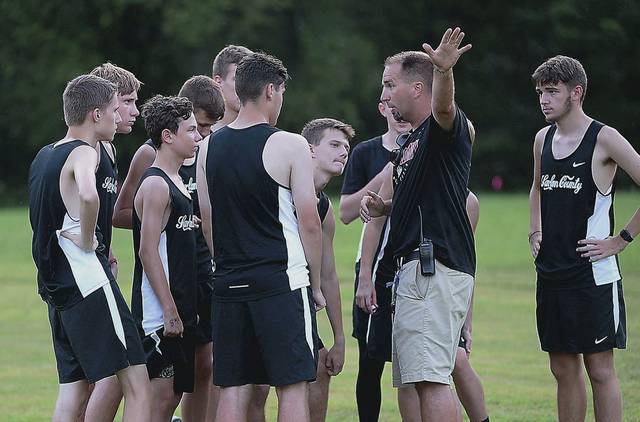 Harlan County coach Ryan Vitatoe talked to his runners during a meet earlier this season. The Black Bears finished fifth in regional competition Saturday at Wayne County and qualified for the 3A state meet.

The Harlan County boys cross country squad ensured that one of the most impressive seasons in school history will end on the grounds of the Kentucky Horse Park.

Caleb Brock medaled, and the Bears booked a second consecutive trip to the state championship meet with a fifth-place finish Saturday at the Class 3A Region 7 meet at Wayne County.

“I’m very proud of our boys program,” Harlan County coach Ryan Vitatoe said. “It’s been our goal all season to earn a return bid to the state meet. We wanted to prove last year wasn’t an anomaly, and they did that today.“

“I’m very proud of Caleb. To get on the podium at this level is an accomplishment. He lives, eats and breathes the sport and he deserves a moment like that,” Vitatoe said.

“They’ve overcome a lot this season with injuries, but this group didn’t let that deter them. They kept fighting, and they deserve this. I’m happy for them and I’m very proud of them.”

The boys team will be joined in Lexington next weekend by seventh-grader Peyton Lunsford and freshman Caitlin Rice, who qualified individually in the girls race. Lunsford also medaled for Harlan County, finishing seventh with a time of 20:58.02, while Rice (23:55.69) was 26th.

“Peyton came out this season like a rocket,” Vitatoe said. “To get on the podium at this level as a seventh-grader is impressive. She focused on the race plan we put together for her today, and it paid off. She most definitely deserves this opportunity, and I’m proud of her.

“I’m tickled to death for Caitlin. She’s super quiet and reserved and just shows up and goes to work each day. She’s a hard worker, and she deserves to be there. I told her all year, I believe she would have qualified last year had she not had injuries at the end of the season.”

“I’m proud of all these kids for their work this season. I want to acknowledge my seniors, to thank them for all they’ve given to our program,” Vitatoe said. “I also want to thank coach (Arynn) Johnson for all her hard work. Now we turn our focus to state.”

Madison Central freshman Ciara O’Shea won the race with a time of 18:56.80.

The Class 3A state championship is set for Saturday. The girls race is slated to begin at 1:30 p.m., followed by the boys race at 2:15.