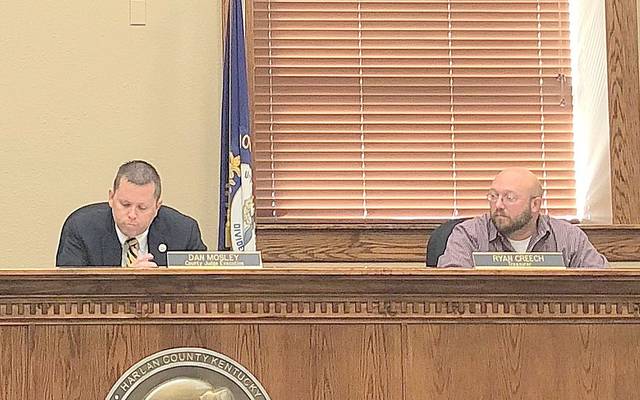 Treasurer Ryan Creech discussed an RFQ for audio/visual design with Harlan County Fiscal Court members on Oct. 15 to determine which company to go with for Portal 31 renovations. The court voted to allow the judge-executive to enter into contract negotiations with CED following the discussion.

Harlan County Fiscal Court members discussed the request for quotation (RFQ) for audio/visual design service sent out to companies interested in Portal 31 renovations during a meeting on Oct. 15. Treasurer Ryan Creech said Communications Electronic Design (CED) sent in a packet for the design, noting their history with Portal 31 is already established through the work currently in the exhibit.

Creech added the company has maintained all of the certifications required for the project and all of the submission guidelines were met.

CED has worked on a variety of projects, including the Kentucky Derby Museum, the Flint Hills Discovery Center, the Harley-Davidson Museum and more.

“At CED, we have qualified & creative thinkers that can facilitate accomplishing the most complex A/V design challenges. Our foundation in audio and video production provides a unique understanding of the media development process, allowing for maximum innovation in design integration and ensuring optimal display resolutions,” the company says on their website.

The fiscal court motioned to approve the judge-executive to enter into contract negotiations for audio/visual designs for Portal 31, which will be paid for in part through the AML Pilot Grant the fiscal court received for the project.

Fiscal court members also voted to advertise for solid-waste collection services during their meeting, ultimately deciding to proceed with the advertising in wake of the contract’s expiration at the end of the year.

Harlan County Judge-Executive Dan Mosley said he is not “displeased with the solid waste services” provided by Waste Connections, but he also had no issue in making a recommendation to advertise the services and sought the court’s approval.

“Let me be clear,” Mosley said, “solid waste services aren’t in jeopardy if we decide to advertise.”

The magistrates were in agreement with Mosley, coming to the conclusion to be unbiased on the matter and give other companies an opportunity to apply for such services.

After further discussion, the court motioned to give the judge-executive permission to advertise for solid waste collection before the contract expiration date on Dec. 31.

• tabled discussion regarding the maintenance and ownership of various Harlan County roadways until the next meeting in November;

• entertained a motion to pay bills and add-ons, approve the interfund transfers (as needed) and cash transfers;

• discussed propane bid and awarded the bid to AmeriGas Heritage Propane at $1.07 per gallon with tanks and equipment already in place;

• approved the Harlan County Sheriff’s Department 3rd quarter report, subject to audit, authorizing the judge-executive to sign and all documents;

• accepted the report of the auditor of public accounts agreed-upon procedures engagement of the Harlan County Sheriff, for the period of Jan. 1, 2018, through Dec. 31, 2018;

• reflected the sheriff’s bond has been increased from $300,000 to $2.5 million, retroactive to Oct. 1, which is implemented each year due to the collection of property taxes;

• reappointed Howard Farmer to the Cawood Water District Board for a four-year term;