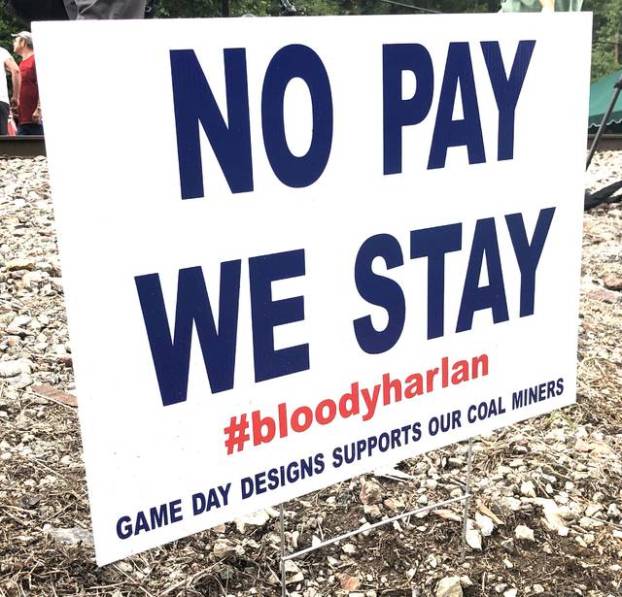 Although the “No Pay, We Stay” motto may be seen as coming to an end, miners continue to fight in bankruptcy court for wages they earned but were not paid while seeking better opportunities for their families.

After two months of blocking the train tracks in Cumberland — preventing a load of coal mined from Cloverlick Mine No. 3 from leaving — Blackjewel miners impacted by the company’s bankruptcy filing on July 1 have decided to end their peaceful protest though they still remain unpaid.

Miners first decided to take to the tracks during the afternoon hours of July 29 when word spread of coal being loaded for transport from a mine owned by Blackjewel. Since then, miners have been blocking the tracks at Sand Hill Bottom Road in order to keep the coal from leaving until they were paid.

Over the course of the past two months, the miners allowed the CSX train engine to pass without the coal, continued to battle in bankruptcy court for wages taken from their accounts and rallied together in a time of need.

Through many efforts to claim paychecks rightfully owed to them, miners and their attorneys have been unsuccessful as bankruptcy hearings continued to be scheduled.

Ned Pillersdorf, a member of the miners’ legal team, said the Kentucky Department of Labor and Blackjewel are still in the process of trying to negotiate some type of resolve to end the fiasco. If no agreement can be reached by Oct. 1, a court-ordered mediation will be conducted by a federal magistrate shortly after.

Although the miners have been ravaged by the bankruptcy financially and emotionally, many of them have enrolled in schools, found other jobs or moved to seek better opportunities for their families instead of waiting for a check that may never come.

Pillersdorf posted on Facebook a list of the “outstanding legal team we have assembled to help our miners,” saying he is proud to be a part of such a team.