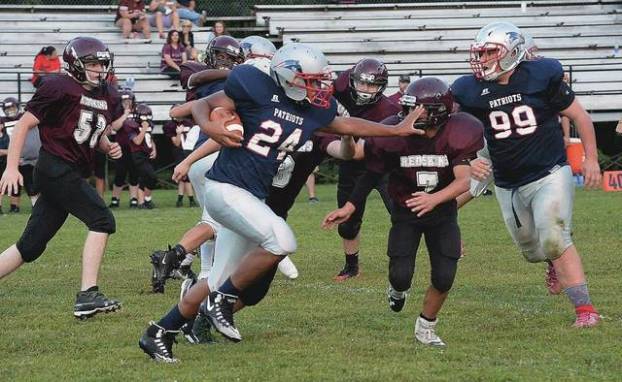 With their opportunities limited by a ball-control Cumberland offense that took just under 11 minutes off the clock in the first half during a 14-play drive, the New Harlan Patriots had to make the most of their chances.

“We had limited touches. Cumberland had a good gameplan to keep our offense off the field,” New Harlan coach Scott Caldwell said. “Our offense did a good job. I think our offense took it up a notch from the last game, which means our offensive line is blocking better. Our defense did well, except for the penalties. I was proud of them overall though.”

New Harlan (3-1) found its best success with an inside reverse play that began with a handoff to Samuel Henson followed by a handoff to Caleb Johnson, who scored on a 58-yard run in the second quarter and a 15-yard run on the first play of the fourth quarter.

Henson had all five carries of the game’s opening drive, covering 51 yards. He went in from the 5 with 5:49 left in the first quarter. Deon Brown followed a block from Carter Howard for the two-point conversion.

Cumberland followed with its 14-play drive, aided by two New Harlan procedure penalties. Cameron Anderson and Steven Childers had the bulk of the carries in the drive, which ended with a stop at the New Harlan 18 on fourth down.

Johnson broke free three plays later as the lead grew to 14-0 with 1:19 left in the first half.

Cumberland appeared to score in the closing seconds of the half when Johnson fumbled a punt and Cumberand’s Shawn Carroll picked up the loose ball and returned it 30 yards to the end zone. Officials ruled the muffed punt could not be advanced.

A bad snap on a punt gave New Harlan the ball deep in Cumberland territory early in the third quarter. Darren Alred scored on the Patriots’ first offensive play as he went around right end 13 yards for a touchdown. Jared Rhymer went in for two points and a 22-0 lead with 5:43 to play in the quarter.

A 24-yard run by Brown set up the final New Harlan score, a 15-yard run by Johnson on a fourth-and-11 play to open the final period.

New Harlan will travel to Letcher Central on Thursday. Cumberland (2-3) will play host to Harlan on Tuesday.

Fultz, Brewer, Wyatt Hensley and Brayden Clay each had two tackles to lead the defense.

Fred Childers and Adams recovered fumbles for the Redskins.

With the score tied 0-0 in the closing seconds, Harlan running back Will Shepherd broke free on a 60-yard touchdown run to send the Green Dragons to a 6-0 win over visiting Leslie County in fifth- and sixth-grade football action Thursday.

No details were available on the seventh- and eighth-grade game.

With a four-year streak of 52nd District championships to their credit and a senior-dominated roster returning with their sights set... read more