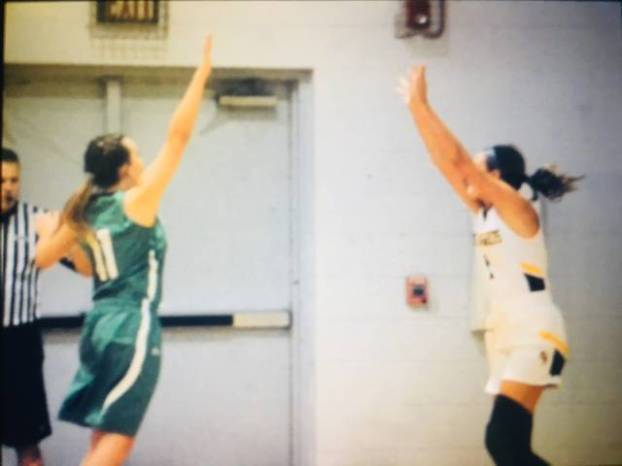 Brynlee Foster shoots a 3-pointer during Middlesboro’s 42-38 victory over Harlan on Thursday.

The Harlan Lady Green Dragons’ seventh and eighth grade team traveled to Middlesboro on Wednesday to take on the Middlesboro Lady Jackets at West End gymnasium. The two teams played a back-and-forth game with the lead changing as many as 12 times. Middlesboro held off a late push from Harlan to secure a 42-38 victory in their season opening game.

“We were glad to open the season at home,” said Middlesboro coach Bethany Evans. “I thought we played hard. We didn’t quit and we didn’t give up. We played well defensively. We need to work on a few things offensively, but I am pleased with our effort tonight.”

Middlesboro’s defense stepped up in the second quarter and held the Lady Dragons to a single bucket by Karst and a free throw from Abbie Jones. Middlesboro scored eight more points to complement their defense, including a go-ahead layup as the halftime buzzer sounded. The Lady Jackets held an 18-16 lead heading into halftime.

After the half, both offenses came out hot. Harlan regained the lead in the third on two back-to-back threes by Wynn. Wynn totaled 10 points in the third, followed by Karst with four.

Middlesboro’s offense was equally as potent, matching their game-high total with 12 points in the third quarter. Both Foster and Glover added three each. Halaya Brown, Keevie Betts and Kaylee Lawson added a bucket each. Harlan outscored Middlesboro 14-12 to tie the game 30-30 heading into the final quarter.

Things began to get chippie in the fourth as both teams battled to regain the lead. The lead changed four times in the final period of the game. The Lady Jackets held the Lady Dragons to just eight points, while scoring 12 of their own to secure a four-point victory over Harlan.

“Harlan is always an emotional game,” said Evans. “They played good, and I’m proud of them. We are going to continue to work to improve and get better as a team every day.”

The Lady Jackets will travel to Barbourville on Tuesday to take on the Lady Tigers in their first road game of the season.

The Harlan Lady Green Dragons’ fifth- and sixth-grade team traveled to Middlesboro on Wednesday to take on the Middlesboro Lady... read more