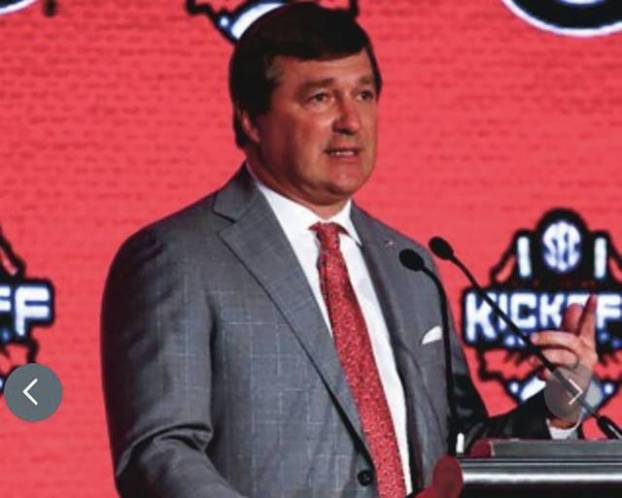 Bulldogs hoping to ‘do more’ this season

Georgia has been the top dog in the Eastern Division of the Southeastern Conference during the past two seasons and appear to be one of the favorites to win the division for a third straight season.

The Bulldogs have compiled a 24-5 record during the past two seasons and came close to defeating Alabama in the national championship game two years ago. Despite the success, Georgia coach Kirby Smart knows “it’s not good enough (and) it’s not where we expect to be at the University of Georgia.”

“Our mission is to bridge that gap, you know, by the actions we take, hence the word “do more,” those words require action,” the Georgia coach said. “I heard a quote coming in here. I read a quote coming in this morning that really grabbed me, and I’m not a big quote guy, but when I heard that quote, I thought that’s something that our players can relate to — ‘life has no remote. You got to get up and change it yourself.’”

Smart was moved by the quote and said it applies to his entire program from top to bottom.

“If you think about that, so many of us want to take the easy way out, whether it’s changing the channel with the remote or anything else, not doing the work that has to be done, we want to do more at the University of Georgia,” he said. “We’re not complacent in what we’ve done, and we know we need to take that next step.”

That next step would appear to be getting over the proverbial hump when it comes to big games. The Bulldogs lost to Alabama in the SEC title game and fell to Texas in the Sugar Bowl, but Smart said the top priority is the season opener at Vanderbilt.

“The next step for us, and I don’t mean this to be trite, but it’s Vanderbilt,” he said. “You have to get to that point because we don’t have Alabama on our schedule. We know Alabama has been very powerful in this conference for a long time. We respect the job they do. I got a lot of respect for coach (Nick) Saban and his program. I probably wouldn’t be here today if it weren’t for him. I also understand we have a really good program too.”

Saban’s assistants, including Smart, are a combined 0-16 against their former boss. Georgia won’t play the Crimson Tide unless both schools compete in the SEC title game and Smart said the task will be hard for former Saban assistants Jimbo Fisher (Texas A&M) and Will Muschamp (South Carolina) when their respective teams play Alabama during the regular season.

Smart added Saban’s success extends beyond the walls of his office and the playing field and spreads throughout the recruiting trail.

“He’s like he is on the field — he’s very relentless,” Smart said. “He’s active as a recruiter. When you talk to a kid, a lot of times you find out he’s talked to Coach Saban as well. That’s part of it. It’s communications skills that help you recruit, and he doesn’t leave any stone unturned, and I got a lot of respect for the job he does.”

Although Georgia is a favorite to win a third straight SEC title, Smart isn’t complacent just competing in the SEC finale and likes to “set the bar really high.”

HOOVER, Ala. (KT) — Mark Stoops isn’t concerned where his Wildcats will be ranked when the preseason rankings are released... read more