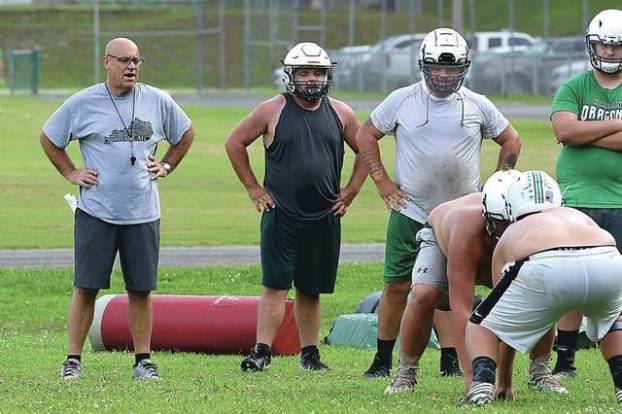 First-year Harlan coach Eric Perry worked with linemen during a drill Monday at the Harlan High School practice field. The Dragons, who finished 4-7 last year, began practice last week in preparation for the season opener on Aug. 23 at Harlan County.

As the Harlan Green Dragons begin preparation for the 2019 football season, first-year coach Eric Perry is focusing on improved conditioning from his players and patience from the coaching staff.

“It’s been a little slow. There just aren’t a lot of bodies out,” Perry said Monday. “The ones we have are working hard at it. I can’t ask for any more. It’s a learning process and will take some time. We’re learning two new schemes basically. We have to be patient. I hope I’m patient enough.”

Perry has 17 years of coaching experience, including eight as an assistant for the Dragons, but this is his first camp as head coach since he led the Cawood Trojans in 2008, the last year for the school before merger.

“The main thing I’m looking at is kids learning what full speed is,” Perry said. “We have a lot who don’t understand that yet. We want our kids to not be afraid to make mistakes but we want them to go hard all the time.”

Numbers are down this summer, as expected when the Dragons lost 11 seniors from last year’s 4-7 squad, including their top passer, top two rushers, top two receivers and seven of their top 10 tacklers. Improved conditioning is crucial for a team with little depth, but Perry is also working on teaching the basics of his schemes.

“It’s a little bit of both. We have to be in good condition, so that’s No. 1,” Perry said. “I want us to be good at a few things and not try to do too much. I don’t want the kids thinking a lot. I don’t want to send them home with a lot of homework I want them to learn here. We have 19 kids out now and, hopefully, we’ll pick up a few more.”

Perry said players could still report for practice for the next week or so but added the new players will have “makeup running” for what they’ve missed to this point.

“The kids we have are showing a great work ethic,” Perry said. “When you only have 95-96 boys in the school…if we get 25 bodies we’re killing it. I have to remind myself of that.”

Perry said the Dragons would play the 50 defense he’s always favored and would run a spread offense with four receivers.

“Our schemes are basic with a 50 on defense and spreading it around on offense,” Perry said. “We’ll be a zone read team. We won’t have a whole lot of plays, but we can give people different looks.”

Harlan will open its season on Aug. 23 at Harlan County, the first intra-county matchup since the 2008 season.

The coal miners in this county give our community such a sense of pride. They roll their sleeves up, grab... read more