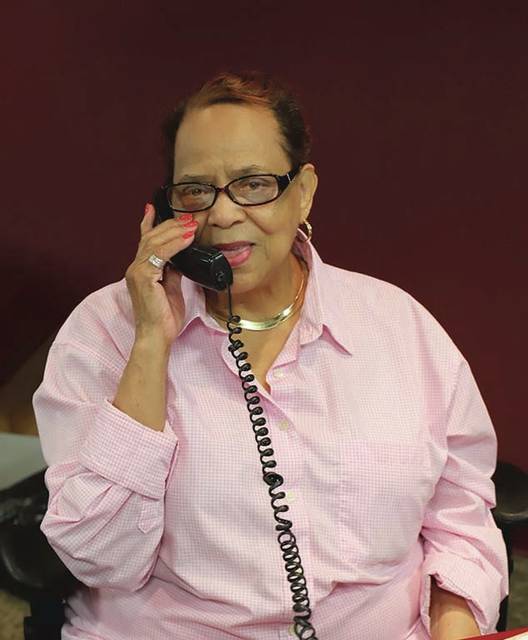 Billie Gray, the receptionist at Harlan County High School since the school opened in 2008, recently retired after 54 years of service in area schools and school programs.

Gray touched many lives in years at local schools

For visitors at Harlan County High School the past 11 years and many years before at Evarts High School, the first face most saw was that of Billie Gray, the receptionist at the front desk of both schools.

Gray had a way of making visitors feel at home and had a unique style in relating to co-workers who shared their memories on Tuesday. Several teachers and administrators at Harlan County High School went back many years in their thoughts and comments as they said goodbye to Gray, whose 54-year career is coming to a close.

Gray and math teacher Paul Barnes were honored with rocking chairs to mark their retirements in a program at the HCHS lunchroom on the final day of the school year.

“There are employees who you know have the children’s best interests in the back of their mind and their heart, and Billie Gray was one of those,” said former Evarts and Harlan County principal Bob Howard, who attended Tuesday’s program to honor Gray. “That goes back to the NYC (Neighborhood Youth Corps) program when I worked for her, then 20 years as my school secretary when I taught at Evarts, then three years as principal at Evarts and five years at Harlan County. She was one of those people who could spot something I needed to know about and would bring it to my attention. She was always concerned with students’ needs.”

Several other current HCHS teachers talked about their experiences with Gray and shared funny stories, mainly centering around Gray’s assertiveness in her job along with a few cases where her announcements on the public address system didn’t come out exactly as she had intended.

“There were so many other stories we could have told,” Howard said. “I remember when she was thinking about retiring several years ago and I brought her back an autograph from (basketball coach) Rick Pitino. He wrote a little note on there and you couldn’t have bought her a Cadillac and made her any happier. I knew I couldn’t miss being here today.”

Growing up in the days before integration, Gray admits she was somewhat sheltered from many of the racial issues of the time.

“I remember riding the bus to Middlesboro and sitting on that long black seat,” she said. “Since there were five in my family, I thought we sat there so we could sit together. Of course, I learned it was where black people had to sit. I also remember going to the 5 and 10 cent store and having to move on after we got what we ordered. I also remember Mama buying us an ice cream cone at the drug store and telling us to go on outside. I thought it was because she didn’t want us to drip on the floor, but it was because we were not allowed to sit in the store.”

Gray went on to graduate from Rosenwald High School, then Western, before starting her work career that included time as a supervisor with NYC and working on the state human rights committee under governors Ernie Fletcher and Steve Beshear.

She has been a member of the First Baptist Church in Harlan since childhood and has served as church clerk and president of the missionary department, while also singing in the choir and attending the women’s Bible class under “Aunt Nancy” (Johnson).

Gray knows she will miss the daily interaction with teachers, as well as students, fellow office workers and the public. She noted she had worked for every superintendent from James A. Cawood to current school chief Brent Roark.

“It was the enjoyment of my life being able to see and be around people I love every day,” Gray said. “Now, I’m seeing the grandchildren and great grandchildren of the students I worked with many years ago. Children today aren’t that much different. I know I will miss it.”

Gray made the transition to Harlan County after the merger of Evarts, Cumberland and James A. Cawood high schools, and she noted the transition was much smoother than most expected.

“Teachers, students, everybody, we just sort of blended in together,” Gray said. “I don’t think the kids even know, or care, what part of the county the other kids come from.”

Gray says she will spend more time in retirement with her husband of 57 years, Willie. They have two children (Sherrie Johnson and James Christopher Gray), seven grandchildren and one great grandchild.

“We’ll be able to do more things together,” she said.

When asked by a visitor on the final day at school if she had any closing thoughts about leaving her work, Gray showed emotion for the first time during a day of goodbyes.

“I just wanted to say I love God, I love my family, I love my church and I love my school,” Gray said through tears. “It’s brought me this far.”

The Kentucky Transportation Cabinet District 11 Office advises motorists that a new traffic pattern will be put in place on... read more