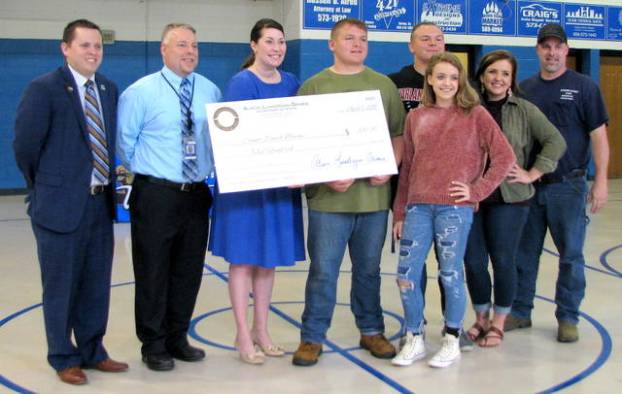 Rosspoint Elementary School student, Connor Blevins, was presented an award of $200 on Thursday by Kentucky Secretary of State Alison Lundergan Grimes for placing third in her annual slogan contest, created to bring awareness to voter participation.

Connor Blevins is an eighth grade student at Rosspoint, who lives in Baxter. He is the son of Scotty and Chandra Howard.

Grimes presented the award to Blevins during the slogan presentation Thursday morning in the Rosspoint gymnasium.

During the presentation, Grimes invited Blevins to pick out 10 of his classmates from the crowd for a demonstration on voter participation in Kentucky. Of the 10 students, Blevins was instructed to pick seven of them to step forward. Grimes explained seven out of 10 people in Kentucky register to vote, leaving the other three missing their chance to vote. Grimes then instructed Blevins to pick only one student from the seven, explaining how only one in seven actually show up to vote on election day.

Grimes added with the help of Blevins’ slogan, more people in the state will be encouraged to “get out and vote,” potentially increasing voter participation.

Students participating in the contest were to write a slogan that addresses voting, voter registration and/or elections in the state. The slogan was to be attention-grabbing and expressive of voter participation in local, state and national elections.

The contest was open to all Kentucky students in grades 6-8. Students were limited to one slogan entry to be submitted by Dec. 21, 2018 at 5 p.m. Winning entries were posted on the secretary of state’s website and used for other civic-related material.

According to the secretary of state’s website, “The slogan contest is an excellent opportunity for students to engage in our democratic process, with the possibility of winning valuable prizes. Especially in light of the trend of decreasing voter participation among the youngest demographics, Secretary Grimes encourages all students and teachers to demonstrate their commitment to active citizenship by participating in the contest.”

The website adds the winners of the contest were chosen by an online poll, open to the public.

Sponsors of the contest include KEA and KEA Retired, the Scripps Howard Center for Civic Engagement at Northern Kentucky University, the University of Kentucky Scripps Howard First Amendment Center, the Kentucky Department of Education, Kids Voting Kentucky and Harp Enterprises.