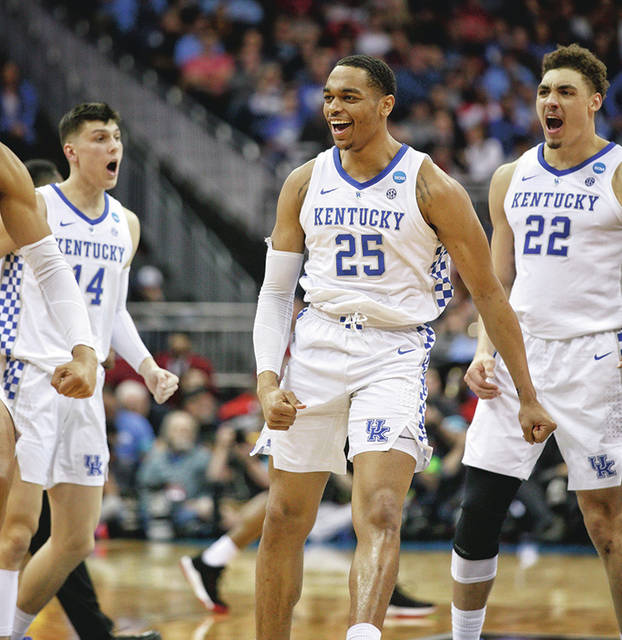 Kentucky’s PJ Washington (25) and his teammates celebrated after holding off Houston, 62-58, in the Midwest semifinals in Kansas City.

Washington, who missed the first two games of the NCAA Tournament because of a strained left foot, scored 16 points as Kentucky advanced to the Midwest Regional finals with a 62-58 win over Houston Friday night at the Sprint Center.

The Wildcats will take on Auburn (29-9) Sunday for a berth in next week’s Final Four in Minneapolis. The Tigers stunned top-seeded North Carolina in the opener to reach the region finals for the first time in 33 years. Auburn has won 11 in a row since a 80-53 loss to Kentucky on Feb. 23 in Lexington. Kentucky also defeated the Tigers 82-80 on Jan. 19 at Auburn.

Washington’s return to the court was a boost for the Wildcats, especially in the first half. In his first appearance since Kentucky’s 82-78 loss to Tennessee in the Southeastern Conference semifinals on March 16, Washington paced Kentucky with eight points in the opening half.

Washington had a block in the final minute that led to a 3-pointer by Tyler Herro to give Kentucky a 60-58 lead with 25 seconds remaining. Herro sank a pair of free throws with 13 seconds left to help the Wildcats overcome a late surge by Houston.

Herro led the Wildcats with 19 points.

Kentucky lost to Kansas State 61-58 in the Sweet Sixteen in Atlanta a year ago, but avoided a misstep this time to set up an All-Southeastern Conference regional final.

Armoni Brooks paced Houston (33-4) with 20 points. Brooks made six shots from long range, including five in the second half.

Auburn coach Bruce Pearl said his team learned from their second setback to the Wildcats, which gave Kentucky a regular-season sweep of the Tigers.

“The lesson there was we didn’t — because we respect Kentucky so much and we recognize they had a great night, these guys weren’t destroyed,” Pearl said following his team’s win over the Tar Heels. “Kentucky really beat us. We didn’t play great, but we got it handed to us because they played so well.”

Auburn has thrived behind the arc and made 17 3-pointers in the win over the Tar Heels.