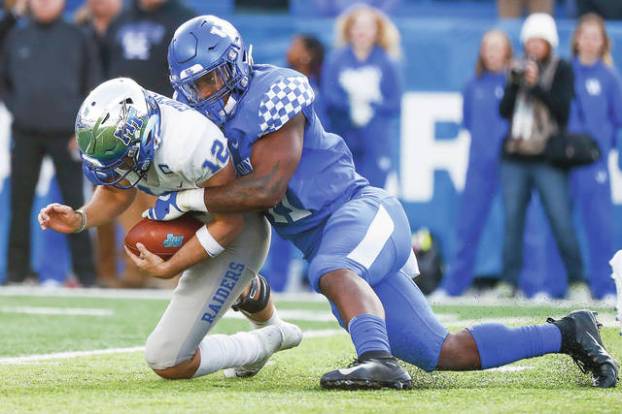 Decision to stay at UK paid off for Allen

LEXINGTON (KT) — Josh Allen’s decision to return for one last season is paying off in dividends and the Kentucky defensive end is earning praise from the National Football League for making the most of his senior campaign.

“I was just talking to a couple pro scouts (last week) and they’re using him as a reference to other juniors across the country,” Kentucky coach Mark Stoops said. “I don’t want to put a dollar figure on it but absolutely significant the difference between coming out a year ago and coming out now. He’s a great example for a lot of players.”

The postseason awards keep stacking up for Allen, who was named first-team All-American by the Associated Press, ESPN.com and CollegeFootballNews.com on Monday. Since the season ended, Allen has received the Bronko Nagurski Award, Chuck Bednarik Award, Ronnie Lott Impact Trophy Award, as the nation’s top defensive player. He also was named Southeastern Conference Defensive Player of the Year by the Associated Press and coaches in the league, first-team All-SEC by the AP and conference coaches. Allen has been honored by the Walter Camp Foundation, Sports Illustrated, TheAthletic.com, ESPN, Associated Press and College Football News.

Stoops said once Allen made up his mind to return to Kentucky, he left no regrets, leading to a spectacular senior season.

“He never looked back,” Stoops said. “ Once he decided to do that, it wasn’t any doubt, it wasn’t any ifs or buts. He went to work and went through his process of getting himself ready to play and preparing himself for the season and for each game.”

Stoops had an idea Allen was going to be among the great defensive players at Kentucky more than four years ago during the recruiting process.

“Everything checked out and we liked him. Next thing you know, we’re signing him. Like I said earlier, once he got on campus, we did know right away that he was a player. You don’t know how fast that’s going to come, and I didn’t know he would be up for all these national awards and first-team All-American and all that, but we knew we had a player early,” he said. “That’s why he played as a true freshman even though he was underdeveloped. Of course, you know how we were that many years ago. We needed some guys… It was late in the process anyway, so we just went up and liked him. We didn’t care who was recruiting him. We did that a lot and we still do.”

“All the hard work that’s been put in this season, I can’t thank the defensive lineman enough for doing their jobs and allowing me to have unique opportunities to make plays like that,” he said. “I commend everybody in the secondary.”

Stoops said the similarities between Allen and past Kentucky players who have been drafted by the NFL during his tenure are strikingly similar. The topic came up during a recent dinner conversation between Stoops, his brother Bob and Allen during an awards event last week.

“We were sitting there with our coaches, with Josh, my brother Bob was there and we were all just sitting around the table and talking and had a bite to eat and that came up. And not only with the guys I’ve had, but the guys Bob has had and with the guys we spent time with this weekend, and Josh had an opportunity to be around all these players. And one thing that he brought up and talked about was how good of people they are. So, I think that’s the case. You know, these guys have a trait that starts with being good, humble, hard-working people. Obviously very talented, but they work exceptionally hard to be in that situation and on that platform and I think that’s a common trait by all of them.”

Allen is among the top players on that list.