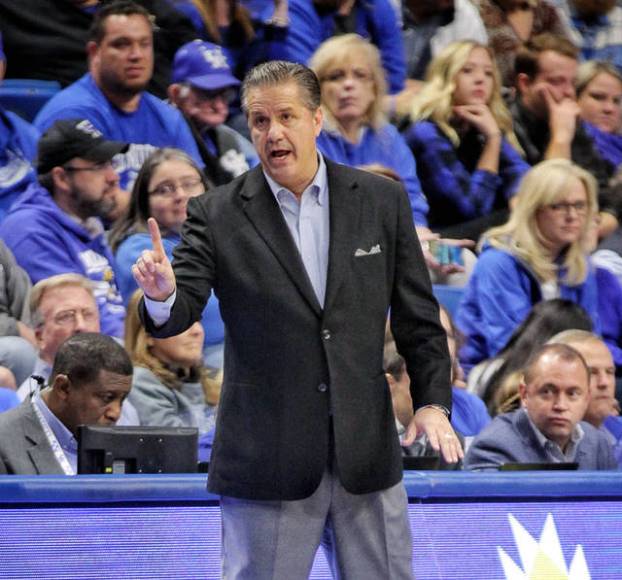 Kentucky coach John Calipari and the Wildcats will learn their destination for the upcoming NCAA Tournament during a selection show on Sunday. The Wildcats open play in the SEC Tournament on Friday in St. Louis.

ST. LOUIS (KT) — The NCAA Tournament Selection Committee is hunkered down and set to begin the selection process for the Big Dance.

Creighton Athletics Director Bruce Rasmussen, chair of the Division I men’s basketball committee, said once the teams are selected, the committee crafts together a final bracket, which takes approximately an hour to complete with a few exceptions.

Rasmussen said the process isn’t limited to particular criteria and added the committee follows “the bracketing principles pertaining to geography as we strive to get as many teams as we can to the closest site available.” The committee also takes into “consideration conference affiliation as we try avoiding matchups of teams from within the same league.”

Rasmussen also added the committee doesn’t “try to project how a team will do with or without a player.”

Kentucky freshman forward Jared Vanderbilt is being evaluated on a day-to-day basis after suffering an unspecified injury in practice earlier this week. Vanderbilt wasn’t expected to practice Wednesday. Vanderbilt has averaged 7.9 rebounds and 5.9 points since making his debut against South Carolina in January.

“We don’t try to project how a team will do with or without a player,” he said. “We try to look at what they’ve done over the entire year and make a decision based upon that.”

Missouri coach Cuonzo Martin confirmed Wednesday that heralded freshman Michael Porter Jr. will play in the team’s first game of the SEC Tournament Thursday. The Tigers will play the winner of Wednesday night’s Georgia-Vanderbilt game at 3:30 p.m. Thursday in St. Louis. Porter was considered a lottery pick before suffered a back injury in November.

Martin said Porter won’t start and isn’t sure how many minutes he will contribute.

Even though it was the season opener for both teams, Cumberland seventh-grade right hander Brayden Blakley looked to be at... read more