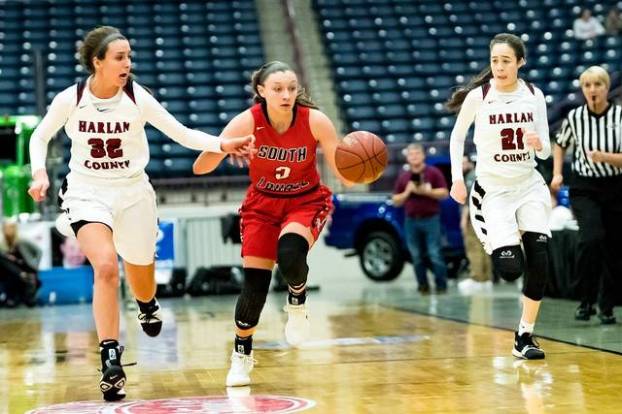 “It’s been a whirlwind since the girls state tournament is so close to the regional,” Harlan County coach Debbie Green said Tuesday, just after a pep rally at the high school and just before the team left for northern Kentucky. “We already had game film by the time we got home Saturday night. We started looking at that and preparing. We plan to give it our best shot. A team like this one doesn’t come around very often, and we’re going to take advantage of it. We aren’t going up there to show up and have a good time. We’re going down there to try to win. They are looking at this the same as the regional tournament.”

The Lady Bears will face quite a challenge in the 8 p.m game against Clark (26-7), an experienced team that knocked off top-ranked Campbell County in the 10th Region Tournament semifinals on Friday.

“We played them twice this summer, so we know their personnel,” Green said. “They are very physical. We need to come out and throw the first punch.”

Clark played in last year’s tournament, knocking off Harlan 81-63 in the first round before falling to eventual champ Mercer County in the quarterfinals

“We have to handle the ball and we have to match them physically,” Green said. “The most important thing is handling the basketball. We can’t afford to get down early. We have to come out and put the pressure on them. They have some strong players. They aren’t bigger than us, but they are probably more athletic. They try to push you to the limit with their physicalness.”

Green gave quite a bit of credit for the Lady Bears’ success to the reserves for their work in practice. She said they would play a key role in Harlan County’s practice on Tuesday night at Fort Thomas Highlands in preparation for the game Wednesday.

“Our younger players have worked hard preparing our starters in practice. I have to give them a lot of credit for helping us get ready last week.”