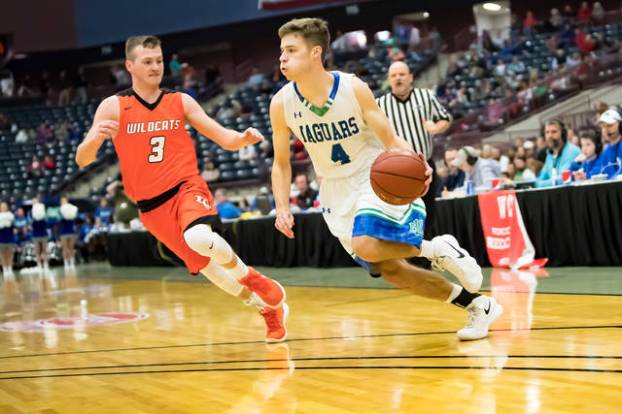 CORBIN —North Laurel coach Brad Sizemore preached to his team the entire week about how dangerous of an opponent 51st District runner-up Lynn Camp would be.

As soon as he found out his Jaguars would be playing the Wildcats in first round action of the 13th Region Boys Tournament, Sizemore knew his team had its hands full.

It looked as if North Laurel (29-4) was going to cruise to an easy win after the Jaguars jumped out to a quick 8-0 lead. But Lynn Camp (23-8) fought back and made a game out of it, leading by five points (49-4) with five minutes remaining in regulation before seeing North Laurel close the game out with a 19-5 run to advance to Saturday’s semifinals with a 63-54 win.

“We beat a really good team tonight,” North Laurel coach Brad Sizemore said. “They played really well, and we played a couple of bad quarters and got behind. But late in the second half, we turned it on and got the win. That’s why I like this team. When we don’t play well, we find a way. It’s survive and advance at this point, and we had some kids tonight that stepped up when we needed them to. We made some big plays down the stretch. We could have easily got beat by double figures, but we kept battling, and now we’re going on to the next game, and we’ll have another battle in our next one.

Lynn Camp coach Dinky Phipps felt nerves played a role during key stretches of the fourth quarter with his team holding onto a slim advantage. The Wildcats’ last lead came with 3:35 remaining in regulation, as Jacob Belew scored on a layup to give his team a 52-51 edge.

“We gave them everything we could,” Phipps said. “We got the five-point lead late, and I kept telling the kids to attack the goal, that they would have to foul us, but we got timid. I was down to one time out, and I was trying to save it if they made a run, and things just got to us in the end.

“I wanted the ball in Tanner Boggs’ hands, and they started double and triple teaming him, so he had to pass the ball off, and to be honest, Jacob Belew was the only one to attack the goal in the end. Like I said, we just got timid, and didn’t attack the goal. I was wanting to spread the floor a bit, but we weren’t able to do it. I can’t say anything bad about our effort. We had a chance to win, but we ran out of gas at about the 29-minute mark.”

North Laurel’s Brian Gray got the hot hand down the stretch, his 3-pointer with 3:11 remaining gave the Jaguars the lead for good at 54-52. He scored 12 of his game-high 25 points during the game’s final seven minutes.

“Brian started to make some shots, which was big, and we were also able to turn them over finally,” Sizemore said. “We were able to get some stuff going to the basket — you’ve got to give them credit. They’re a tough match-ups for us because they play five guards, and they spreaded us out, but this is a good win. Any time you can win a close game like this in the regional tournament, it’s big. Hopefully, it will give us more confidence, and momentum going into our next game.”

North Laurel led 22-18 at the end of the first quarter and 36-34 at halftime before seeing Phipps’ squad outscore the Jaguars 13-6 during the third quarter to take a 47-42 lead into the final period of play.

Even with his team trailing during the early minutes of the fourth quarter, Sizemore said he wasn’t concerned.

“We wanted a chance to play on Saturday, and see where we are at. We do think we can play with South Laurel. We respect their program, and they’ve got a really good team, but I like our kids, and I feel like if we show up and play anything can happen this time of the year.”

Despite the loss, Phipps said he was proud of the effort his team gave Thursday.

“We bit ourselves down the stretch, but I do believe Tanner got hammered a couple of times when he was going to the goal, but we just didn’t convert,” he said. “I’ve got four seniors that’s going to be hard to replace in Tanner Boggs, Andrew Jones, Hunter Bevins and Jacob Bundy. We made a good showing, and had a shot to win. We couldn’t get it though, and I guess everyone got what they wanted in Corbin/Central and North/South matchups for Saturday.”

Where will Cats land in NCAA tourney field?

If you haven’t noticed, I like numbers and statistics. Now, that doesn’t mean that I always know what I am... read more