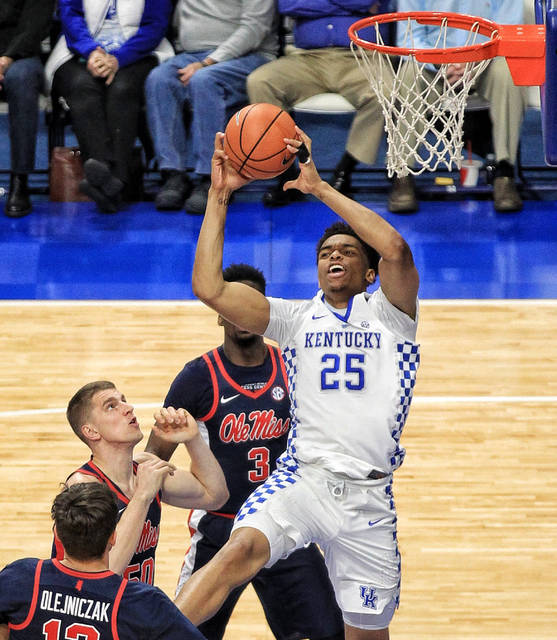 Kentucky forward PJ Washington went up for a rebound in the first half of Kentucky’s 96-78 win over Ole Miss Wednesday night at Rupp Arena.

LEXINGTON (KT) — Kentucky stayed alive in its quest for a double-bye in next week’s Southeastern Conference Tournament.

Although a struggle early, the Wildcats (21-9, 10-7) defeated Ole Miss 96-78 Wednesday night and remained in contention for one of the top four seeds in the league tournament next week in Saint Louis. Kentucky closes the regular season at Florida Saturday and both teams will be vying for the No. 3 slot in the final league standings.

“It was a win we had to have,” Kentucky coach John Calipari said. “I didn’t want to tell (the players) that. This was like the biggest game of the year for us. This was it. We had to win this game.”

The players didn’t fully grasp the importance of beating the Rebels for a ninth straight time until after the contest.

“We weren’t aware of (how big the win was) until (Calipari) came and told us after the game,” Gabriel said. “We found out how big that win was for us and our team, going forward, that was really good for our morale. It was a big win for us.”

The Wildcats closed out February with four consecutive victories following a stretch of four straight setbacks to open the final full month of the regular season. The letdown included losses to Missouri, Tennessee, Texas A&M and Auburn. Two of those losses were by single digits, including a 61-59 loss to the Volunteers.

The Rebels (12-18, 5-12) have lost nine of their last 10 games, but kept pace with Kentucky with a loose mental approach and knocked down nine 3-pointers, including five in the first half. Ole Miss tried to force the tempo early but was hampered by a pair of technical fouls early. Senior Marcanvis Hymon was ejected at the 16:36 mark of the first half.

Both teams were whistled for five technical fouls and the testy environment rattled the Wildcats, especially early in the second half. Kentucky struggled to get into a rhythm, but go on a roll and produced its highest scoring output in conference play.

“I have lovers, not fighters and they were fine,” he said. “You know me, you hit one of mine, I will kill two of yours.”

Calipari didn’t relax until the final seven minutes. That’s when the Wildcats outscored the Rebels 18-9, including a 10-0 scoring spree to produce their fourth consecutive double-digit victory.

“We didn’t revert back, but we didn’t play with the kind of intensity and passion we had been playing with,” Calipari said. “I thought Ole Miss out hustled us, beat us to 50-50 balls, and until the last 15 minutes, we got after it a little bit.”

“They really turned up the pressure,” he said. “They made some really good stops and we didn’t make some of the plays that we needed to make. We cut it to four and right in the middle of what we wanted to do. We just didn’t make plays late.”

Calipari said the scoring surge is because of his team’s willingness to share the ball. Kentucky finished with 19 assists, paced by Gilgeous-Alexander with 10.

“The last couple of games, we’re being willing passers,” the Kentucky coach said. “Part of it was, we had to play a little different, more like (when I coached) at UMass in the 1990s. Shows you, it still works.”

Kentucky now shifts its attention to the Gators, who defeated the Wildcats 66-64 on Jan. 20 at Rupp Arena. Florida The winner likely receives a double-bye in the SEC Tournament.

“It’s a position that we want to be in,” Calipari said. “Let’s see if we can go down there and do something special. It will be hard. They’re a good team.”