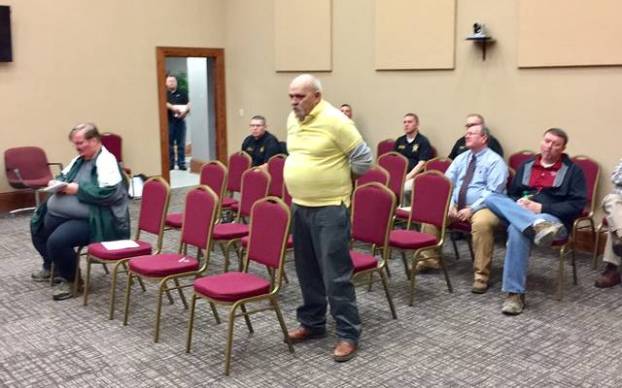 Carl Shepherd addressed the Harlan Fiscal Court on Tuesday about the possibility of leasing some land from the county for use by the Harlan Dollar Bid Facebook group.

The Harlan Fiscal Court heard a request to lease ground for use by members of the Harlan County Bid group during a meeting on Tuesday.

Harlan County Judge-Executive Dan Mosley asked if anyone wanted to address the court.

“My name is Carl Shepherd, and I’m here as a spokesman for the Harlan Dollar Bid site,” Shepherd responded.

According to Shepherd, the Harlan Dollar Bid group is a Facebook-based group which allows members to sell items.

“I’m here to see about leasing or getting some property where we can meet and exchange our items,” Shepherd said. “I’ve been in contact with (Magistrate) Bill Moore, he and I have talked. There’s a space available across from Austin’s (Austin’s ATV Parts and Service in Evarts) that would serve our purpose.”

Shepherd explained the site has grown to approximately 8,000 members.

“It’s just too big for any local lots, so we’re looking for somewhere we can maybe lease,” Shepherd said.

Mosley asked if the business was registered with the state.

“It’s not a business,” Shepherd explained.

Shepherd said many people use the site to generate income, but the site itself does not generate any income. He said the site worked as an online yard sale.

“Anytime we do a lease — we’ve got several leases across the county with companies on buildings owned by the county — it has to be a company name that we lease to that is legally authorized to do business in the state of Kentucky,” Mosley said.

Shepherd advised the Harlan Dollar Bid group does not collect any taxes on sales.

“Everybody handles their own money,” Shepherd said. “We leave it up to each person to do their own taxes.”

Magistrates David Kennedy and Moore both stated they did not have a problem with checking on the legal requirements for such a lease.

“I don’t know who we would actually be leasing to if the court decided to go that route,” added Harlan County Attorney Fred Busroe. “You would have to have an established business registered. You would have to have, as (Mosley) pointed out, some revenue clearances from Frankfort.”

According to Shepherd, the group is currently meeting at a parking lot near the Harlan Center.

Mosley pointed out in general a business must be registered with the Secretary of State and be eligible to do business in the state before the court could grant a lease.

“It sounds like there are a lot of things we’re going to have to look into from a legal perspective,” Mosley said. “If you want to come back to the March meeting, I’ll try to have an update for you…in this particular case we’re you’re not actually a business, I don’t know how we could legally lease anything.”

After some further discussion, Mosley said the court would research the issue and try to have an update at the March 20 fiscal court meeting.

• Permission to advertise for engineering services for Sunshine Fire Department Station 1 was approved;

• Approval to advertise for bids for roof replacement at the Benham Inn was granted;

• Approval to advertise for bids for white beach sand was granted;

• The court granted approval to advertise for asphalt;

• The court granted approval to advertise for road salt.

What is a judge-executive?

In preparation for the upcoming election and to continue the series of exploring what the titles and duties of our... read more