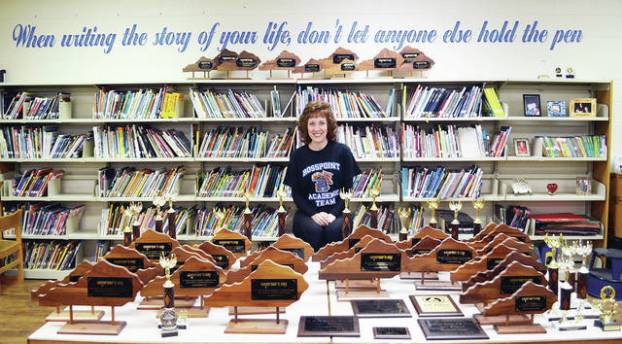 Janie Torstrick will be taking her final academic team to the state Governor’s Cup in March. After building a tremendous record of success, she will be retiring at the end of the current school year.

Janie Torstrick is taking members of her academic team to Louisville for the 2018 Kentucky Governor’s Cup competition March 17-19. This trip will have much more significance to her as her 23-year tenure as coach will come to an end.

Torstrick, who is retiring at the end of the 2017-2018 school year, has fielded many teams over more than two decades and established a tradition of excellence in Governor’s Cup competitions. She is a self-admitted intense competitor.

“Rosspoint has been blessed to have Mrs. Torstrick as our academic coach,” said Principal Bryan Howard. “Her passion and competitiveness over the years has been instrumental in our overall successes, as well as numerous Governor’s Cup championships.”

Torstrick’s current team pulled an upset in the 21st Region Championship last Saturday, after having finished second at the district level only a couple weeks earlier. Her regional championship challengers included teams from all Harlan and Bell county and independent schools.

Over the years, Torstrick’s teams have won 15 district and nine regional championships. She has five first place trophies in the Sixth Grade Showcase.

The farthest her teams have gone in tremendously difficult state competitions is to the top 16 in quick recall. A student placed 13th in composition, an individual assessment area.

Torstrick is completing her 27th year of teaching and is excited about her plans to care for her 3-month-old granddaughter Raelynn.

Prior to Rosspoint, she coached at the former Hall Elementary School. She has been a librarian for 23 years and has taught classes part of the day as well. She even became certified to drive a school bus late in her career.

“I’ve taught science, English, keyboarding, arts and humanities, among other subjects, along with doing my duties as a media specialist,” she said.

Torstrick admits to be being “very competitive, and I like to win,” motivating her to produce winning teams.

As a new coach, Torstrick said she hated going to competitions and not doing well. “I became of the mindset that I would do whatever it took to win a championship.”

Torstrick smiled as she recalled walking into the Harlan County School District’s Academic League competition one evening to find a former student, Andrew Williams, coaching a team from another district school.

Williams, a teacher and academic team coach at Black Mountain, said Torstrick coached him at Rosspoint and impacted his desire to do well.

“Mrs. Torstrick is the reason that I love the academic team now,” said Williams. “She did one of the most valuable things that anyone has ever done for me, and that was push me to be great. She is so dedicated to making sure that her teams are prepared. She studies with them, and helps them grow. Nothing great ever comes easy, and Mrs. Torstrick taught me that to be great you must work hard.”

Williams said Torstrick “is the first name that comes to mind when I think of academic team competitions in Harlan County.”

Polly McLain, a longtime academic team coach and league organizer across the Southeastern Kentucky region, said, “She is a really good coach as can be attested by the success of her teams at Rosspoint.”

With her success, Torstrick has not been selfish by keeping her keys to success to herself.

“The key to winning Governor’s Cup competitions is just a lot of hard work from both myself and my students. The will to win is worthless if you don’t have the will to prepare,” she said. “Also, you must focus on the written assessments, and make sure students know their content if you want to win championships.”

Torstrick said many teams focus on quick recall, but “that is not where the championship lies. The first few times my teams won the regional championship title, we didn’t even place in quick recall. The students must be taught the content in the written assessment areas in order to do well across the board and garner enough points to claim the title.”

Torstrick admits motivating team members is a must for success.

“First, you have to demonstrate a good work ethic yourself. If they don’t see you work hard as a coach to prepare materials for them to study, they’re not going to go above and beyond studying on their own to excel in competitions. They have to see that you’re willing to give up your personal time to stay after school to put in the study hours required to do well.”

Torstrick said at the beginning of each year she asks her members “if they want to be a mediocre team, or a championship team? Do you want to come in second, third or fourth, or possibly not place at all or do you want to walk away from Governor’s Cup events as a champion or knowing you have given your all? I usually share my Dad’s philosophy at some point.”

She makes certain her team members know of her high expectations and that she is not satisfied with mediocrity. She wants it understood that she has “no tolerance for laziness.”

“Student performance depends a lot on what your expectations are as an educator. I compare academic team performance as practice for life, often saying things like, whatever you do in life, do it well. Never be a slacker. Never be happy with just barely doing enough to get by. Working hard has its rewards. Focus on the goal, and produce results.”

She recalls quoting “focus and be productive” so much to one group that they bought her a bracelet for Christmas that had “FOCUS” on it.

“So I guess it sank in,” she says with a huge grin. “I also, often quote what is on the back of our shirts this year, ‘The will to win is worthless if you don’t have the will to prepare.’”

As her coaching and teaching career winds down, she recently reflected on many highlights.

“It’s a highlight every time I see students excel academically, and learn things they wouldn’t have learned in the regular education classroom,” said Torstrick. “Every district and regional championship was a highlight because each one proved to the students that what I had said was valid… ‘If you work hard and study, it pays off.’ It was also a highlight every time I had students progress to the state level of competition, where they are competing against Kentucky’s best academicians.”

Other highlights are from students I’ve had in years past that “tell me what they learned on the academic team made a difference in some aspect of their life. Hopefully, the main thing I taught all my students, not just the ones on the academic team, was to never be satisfied with mediocrity, but to always strive to be the best at whatever they do.“

Torstrick clearly is one of the longest tenured academic coaches in the region. And, as she stated the reason to be, it “has been by far my favorite part of my time in education.”