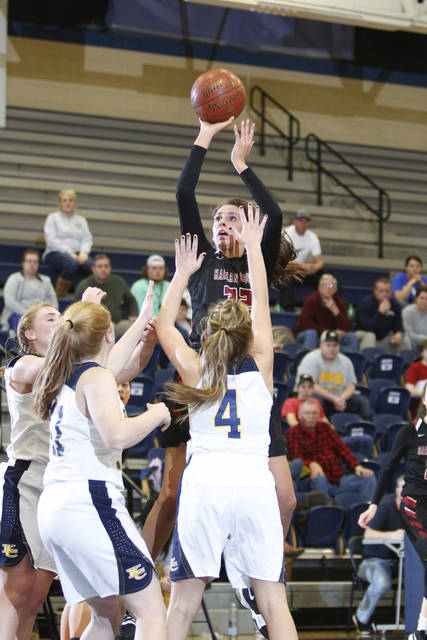 Harlan County senior guard Blair Green has been named a finalist for the Kentucky Mrs. Basketball award. Green, a University of Kentucky signee, has scored over 3,000 points in her high school career and has led the Lady Bears to the 13th Region Tournament finals the past two years.

Green a finalist for Miss Basketball

It wasn’t exactly a surprise, but it was made official on Friday as Harlan County senior guard Blair Green was named a finalist for the Kentucky Miss Basketball award.

Green, who signed with the University of Kentucky last fall after being recruited by numerous Division I schools, has been ranked among the top players in her class nationwide for several years. Green has scored 3,005 points and grabbed 1,064 rebounds in her high school and is ranked by ESPN as the 71st best player nationwide in the 2018 class and is ranked ninth among wings.

She moved into the varsity starting lineup at Middlesboro High School as a seventh grader and has been a key player for the Lady Bears since she moved to Harlan County as a freshman when her mom, Debbie, took over as head coach.

Green was an all-state selection last year when she led Harlan County to a 52nd District Tournament championship and a 13th Region Tournament runner-up finish. She is again among the state’s elite players as a senior as Harlan County brings a 22-2 record into Friday night’s game at home against Knox Central.

“It’s such a huge honor for Blair to have the opportunity and be considered for the 2018 Miss Kentucky Basketball. Miss Basketball is something that I’m sure she has dreamed about since she was old enough to know what it meant,” said Harlan County coach Debbie Green. “It will be a tough race because the 2018 class is one of the most talented groups the state of Kentucky has had in a long time. So just being selected is a high honor with so many deserving girls. But I’m extremely proud of Blair. She has put in the work and everyone that knows her and has played with her, knows she comes to every practice and game with 110 percent effort, a great attitude and a passion to get better every day. She really works at it and it’s paid off for her.”

Corbin’s Andrew Taylor and Knox Central’s Markelle Turner were nominated for the Mr. Basketball award from the 13th Region.

The winner will be announced March 13 in Lexington.

Kentucky hopes to end slide with win over Alabama

A look at the upcoming week around the Southeastern Conference: GAME OF THE WEEKEND: No. 21 Texas A&M at Arkansas:... read more