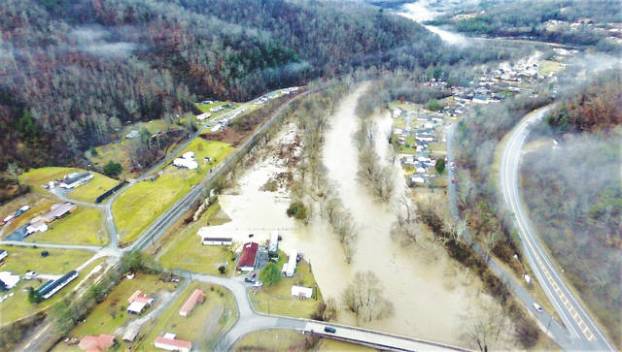 Severe rains caused flooding in many area of Harlan County on Saturday, including the Dayhoit community.

Harlan County, along with much of Eastern Kentucky, suffered severe rains on Saturday causing flooding throughout the area.

A level of 16 feet is considered flood stage.

“We went back up to about 20.5 feet,” Mosley said. “It crested at 20.5 about 2 p.m. after it started going back up, so we really saw two crests throughout this event.”

Mosley pointed out the rain started at approximately 4 a.m. on Saturday.

“The ground was already saturated, we had a lot of rainfall Wednesday and Thursday,” Mosley said. “Already through the month of February I’m told we’ve received over 8 inches of rain.”

Mosley pointed out multiple emergency rescues were required throughout the event.

“People drove their car onto flooded roadways,” Mosley said. “We had more than half a dozen of those. We had multiple people needing to be evacuated from flooded areas on KY 413 in Baxter and at Tremont, Dayhoit and Blair. We also had some people in Evarts that had to be moved as well.”

Mosley said there were accommodations made for those who found themselves with nowhere to sleep due to the flood.

“The Red Cross set up a shelter in the Harlan Baptist Church,” Mosley said. “Christ’s Hands was open and we had the courthouse open. People had to be evacuated up at Benham, and they used the fire station there.”

Mosley expressed appreciation to the county’s first responders and other crew members who worked not only during the flood, but put in many hours before hand to make as many preparations as possible.

“We worked extensively on Friday on problem areas that usually get stopped up, just to make sure everything was clear,” Mosley said. “But when you get that much rainfall in that short a span of time, you’re going to have things get clogged.”

Mosley stated there were no reported deaths related to the flooding.

“Another disaster — and we’ve seen our share over the last three years dating back to Feb. 2015 — We’ve made it through again with no fatalities. That’s a real blessing and it’s something that speaks volumes about the people that are dedicated to making sure people are taken care of,” Mosley said.