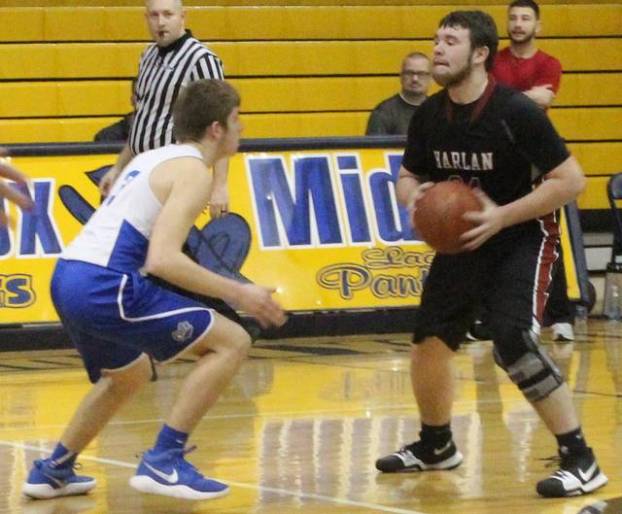 Harlan County guard Josh Turner looked for an opening around a Bell County defender in the 13th Region Freshman Tournament finals on Saturday at Knox Central Middle School. The Bobcats won the championship with a 48-44 victory over HCHS.

BARBOURVILLE — There could be some epic battles ahead in 52nd District basketball if this year’s 13th Region Freshman Tournament is any indication.

Cole and Kobe Burkhart gave Harlan County an early lead before Bell battled back behind Caldwell and Cameron Burnett. After several lead changes, Woolum hit a 3-pointer from beyond halfcourt at the buzzer to put the Bobcats up 17-14.

Woolum’s second 3-pointer pushed the lead to six before the Bears responded with seven straight points behind Josh Turner, Helton and Cole. Turner’s 3-pointer put the Bears up by two and Burkhart scored inside to give HCHS a 27-26 edge at halftime.

Cole stretched the lead to four early in the third quarter with a 3-pointer but Bell closed with a 9-2 run behind treys from Woolum and Caldwell to build a 39-34 lead heading into the final period.

Cole and Helton teamed for seven straight points to open the fourth quarter as HCHS went back on top. Cole’s free throw with 2:07 left gave Harlan County its last lead at 42-41 before Shawn Phipps’ three-point play gave Bell a 44-42 advantage. Two free throws by Caldwell pushed the lead to four before a Helton basket pulled the Bears within two with 58 seconds remaining.

Harlan County had a chance to tie after Burnett hit one of two but Turner’s 3-pointer was off the mark. Woolum hit one of two at the line with six seconds remaining to clinch the win.

Bell advanced with a 57-30 win over North Laurel in the semifinals on Saturday. Dawson Widner scored 13 points and Woolum added 10 for the Bobcats. Dotson scored nine for the Jaguars.

Harlan County, which defeated Middlesboro and Williamsburg earlier in the tournament, was scheduled to play South Laurel in the semifinals but South dropped out of the tournament due to a scheduling conflict.