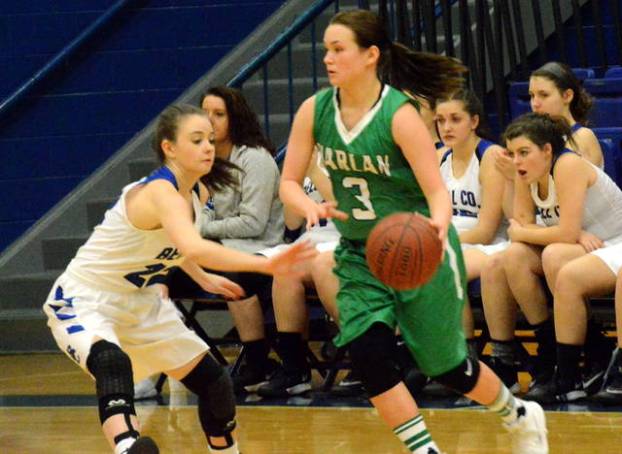 Noah Canady dribbles along the perimeter during Tuesday’s game against Bell County. The senior guard ended the night with 10 points.

The Bell County girls basketball team extended their winning streak with a lopsided district win on Tuesday. The Lady Cats have won six straight after using a big third quarter to defeat Harlan, 61-42.

With the victory, Bell County is tied with the Lady Dragons for second place in the district. Despite the tiebreaker, the two teams will meet again in the first round of the tournament with a regional tournament berth on the line.

“I thought our focus was good coming into the game. The kids knew that we got to play them again in a few weeks. They wanted to come out and play hard tonight,” said Bell coach David Teague. “I thought the kids did that. I thought they were focused in. We didn’t really try to do anything special tonight because we play them again in such a short amount of time.

Brittney Cupp was a game-changer preventing Harlan from scoring on the inside while posting game-high numbers on offense. She registered a double-double after tallying 21 points and 19 rebounds.

“She is capable of doing those things, and we look for her to,” said Teague about Cupp. “We’ve got to keep having that effort moving forward from her.”

Abby Harris and Karlee Cox also put together good games offensively. Harris finished the night with 12 points while going 6-for-9 from the charity stripe. Cox shot 37.5 percent from long range on her way to 12 points.

A pair of Harris free throws near the end of the first gave Bell County a 13-11 lead heading into the second. A layup from Cupp and a pair of free throws from Brea Browning increased that lead to 16-11.

Harlan fought back to cut the lead to two, 17-15, midway through the quarter. A 9-0 run by the Lady Cats extended their lead to 11 with 1:25 remaining in the half. A 3-pointer by Abigail Cornett capped the run and gave Bell a 26-15 lead.

A basket from Taylor Simpson ended the run and cut the deficit to 26-17 heading into halftime.

Bell County outscored the Lady Dragons 19-11 in the third quarter to continue creating separation. The Lady Cats extended their lead to as much as 21 during the frame after Cox hit a 3-pointer to give Bell a 43-22 lead with just over two minutes to go in the period.

The Lady Dragons rebounded with a 6-0 run that cut the lead to 43-28 with under a minute to go. A Natalee King layup capped the run.

Cupp ended the third with a layup to give the Lady Cats a 45-28 lead heading into the final quarter.

Bell County maintained a double-digit lead throughout the fourth and earned a 19-point victory over their district foe.