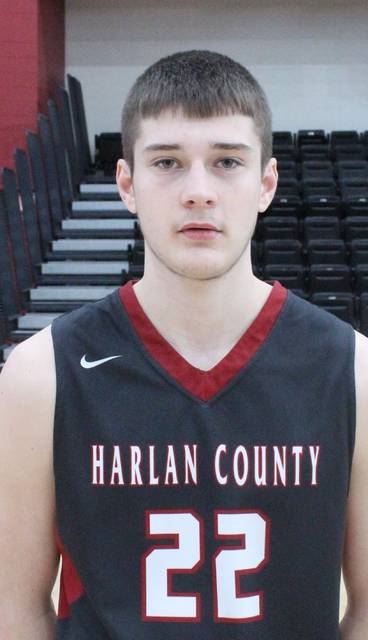 PIKEVILLE —In a matchup of defending regional champions, one bad quarter was one too many Saturday for the Harlan County Black Bears at Pikeville.

The Bears led by as many as 13 points in the second quarter and led by nine at halftime but could not overcome a horrid start in the second half. Pikeville opened with 10 straight points to grab the momentum and never gave it up again on the way to a 72-66 victory.

Harlan County struggled against Pikeville’s extended 2-3 zone as the Bears dribbled into traps that led to five turnovers in the decisive run.

“We did a decent job the first half in building a 13-point lead and then we talked at halftime about being aggressive,” Harlan County coach Michael Jones said. “I’m disappointed the way some of our kids reacted the second half, and they know which ones I mean. We didn’t have enthusiasm and I questioned whether they wanted to be out there or not. We’re too experience of a team to have lapses like that. We came out of the locker room and only scored seven points in the third quarter. There is no excuse for that.”

“Harlan County always has a good point guard and we wanted to try and get the ball out of his hands,” Pikeville coach Elisha Justice said. “We were able to do that with the half-court pressure. We talked at halftime about needing a little more fight and energy to match a team like Harlan County that is always so physical. I felt we did a better job the second half.”

Alex Pace, a junior guard, led the 17-6 Bears with 20 points. Senior forward Tyrese Simmons chipped in with 15. The Bears played without senior guard Drew Nolan, who suffered a knee injury Friday at Harlan.

“Some people were surprised Harlan County is as good as they are this year, but I knew they would be good,” Justice said. “I’ve tried to play Mike Jones’ teams every year I’ve coachedbecause he always does such a good job and has a great team. I think this is the first time I’ve beaten him. It’s good for us to play a team like Harlan County.”

Harlan County started strong, hitting nine of 15 shots in the opening quarter, led by three baskets each from Andrew Creech and Simmons, to go up by as many as seven points before Battalie sparked a late run that pulled the Panthers even before Lamar Burkhart’s basket put the Bears up 18-16 after one period.

Two straight baskets by Rhodes put Pikeville on top early in the second quarter. Spurlock hit a 3-pointer to start a 16-0 HCHS run that also included baskets by Simmons, Patrick Bynum, Gabe Price and Pace as the Bears built a 36-23 advantage with 1:11 left in the half. Battaile had a three-point play and hit two of three free throws to cut the deficit to 38-29 by halftime.

Battaile had two baskets while Rhodes and Kyle Watkins each hit 3-pointers in the 10-0 run to open the second half. Baskets by Simmons and Pace briefly gave HCHS the lead again before a basket by Rhodes and 3-pointer by Battaile put Pikeville up 49-45 going into the final period.

Harlan County continued to struggle against the Pikeville traps with five more turnovers in the fourth quarter as a 16-7 run gave the Panthers a 70-57 lead. Pikeville might a comeback all but impossible by handling the ball extremely well with no turnovers in the first 14 minutes of the second half.

“They have a really good team, and we knew it would be a challenge coming over here,” Jones said. “We’re not going to use any excuses. We had the game in hand and didn’t what we did to get the lead. There are some little things we have to correct before we get to postseason.”

Pace scored five straight points in a late 7-0 run that got the Bears as close as six in the final minute before two free throws by Christian Biliter put the game away.

Harlan County will play host to Corbin on Tuesday on a night that will also include Senior Night and the basketball sweetheart ceremonies.

Freshman guard Tyler Cole led the Bears with 18 points. Kobe Burkhart scored 11. Alex Nantz chipped in with eight, followed by Hunter Helton with six, Josh Turner with four and Michael Simpson with one.