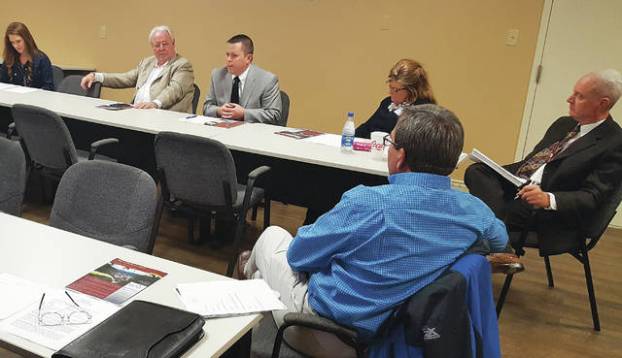 Judge-Executive Dan Mosley and Larry Calhoun, the county’s economic development director, updated members of the ONE Harlan County civic group on the status of local projects, immediate prospects for local job growth, and long-term business development strategies they are pursuing in partnership with federal, state and regional authorities.

During a recent meeting of ONE Harlan County, an economic development group supported by local and regional business leaders, Judge-Executive Dan Mosley and Larry Calhoun, the county’s economic development director, discussed the progress made over the prior year and their goals for 2018 and beyond.

Mosley referred to a variety of projects and programs as “building blocks” that have directly accounted for an additional 350 local jobs in “just a little over two years.”

The job training and placement program through the Teleworks hub in Harlan has added more than 170 people to the active workforce through contracted employment with companies that provide off-site services, Mosley said.

He also noted several other additions to the active workforce have resulted this year from local projects such as the Kitts Creek Forestry Products firewood business, Lydia’s House drug addiction treatment center for women, JRL Coal’s acquisition of Alpha Energy’s operations at Coalgood, and the entry of Trans-Star Ambulance service to the county.

The county has budgeted $400,000 for economic development projects which Calhoun was hired to coordinate. The funding was provided by a two-year grant from SOAR Kentucky (Shaping Our Appalachian Region) a non-profit development agency headquartered in Pikeville.

In addition to the individual projects, the county has invested in refurbishing existing industrial buildings and developing the Sleepy Hollow property in Cumberland as a state-certified industrial site along with the various marketing resources necessary to recruit potential investors to the community.

“I have recently come from a meeting with Gov. Bevin and he feels like there’s a lot of opportunity in Harlan County,” Mosley told the group.

Besides pursuing all the details necessary to provide this “build-ready” site adjacent to the Cumberland golf course, Calhoun has met with industrial development contacts across the world in an effort to sell Harlan County as a viable location for potential large-scale business.

“In terms of economic development, we’ve spent the past two years working on becoming relevant,” Mosley said. “We had to reach a certain level in order to market ourselves to businesses and say, ‘Here we are,’ and ‘Here’s what we’ve got.’”

Local and regional partnerships are beginning “to make Harlan County relevant” with the types of investors who can make a major difference in the employment prospects for the community, he added.

ONE Harlan County provided over $21,000 to fund advertisements in a magazine called “Site Selection,” a specialty publication targeted toward international industrial developers and recruiters. Also, the Pine Mountain Development Corporation, which is currently building the Appalachian Wildlife Center project on the Asher Mining Company property in Bell County, has signed on as a partner in the county’s build-ready site in Cumberland.

“These investments – your investment – have allowed us to be more relevant,” Mosley said, “We are now being seen worldwide.”

Growth will come from the collection of a large number of small business additions that lead to greater diversity in the local economy and a stronger, more robust and more resilient climate for business, Calhoun said.

“Real economic development is a product of growth,” Calhoun said. “You can’t succeed unless you bring in new business, new ideas and different ways to be productive. You have to recruit business that employs 50 and up. The key (to growth) is diversification.”

Calhoun said the situation is getting closer and Harlan County may soon have the chance to convince these types of companies to consider locating some operations here, but the community leaders still have to compete with all the others out there in the development marketplace who are after the same thing.

“There are 17 or 18 build-ready sites in Kentucky at any one time,” Calhoun noted, though right now none are east of I-75 or south of I-64. “That puts Harlan County in a unique position. A lot of companies don’t want to be in the urban environment.”

The most likely prospects for Harlan County will be those companies that engage in light manufacturing or aviation technology, which can be done anywhere, he said.

“Right now we’re in the second phase of development,” Calhoun added. “We’re no longer a start-up. I am very pleased with where we are in the process.”