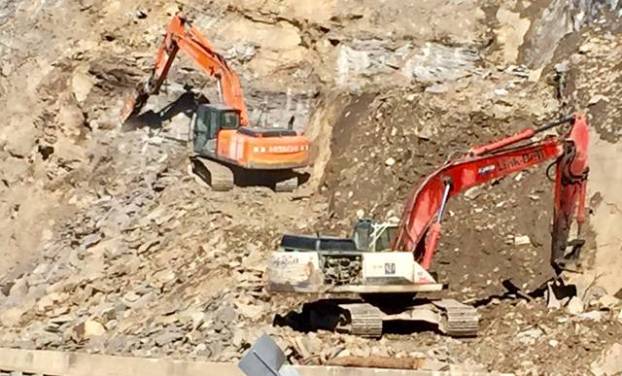 Men and heavy machinery have been performing maintenance work on KY 72 since October. The project is coming to an end in a few weeks.

Those who travel KY 72 near KY 2425 are aware of maintenance work which has been ongoing for several months, causing long traffic delays. The Harlan Fiscal Court was advised during a special called meeting on Friday that the project is ending.

Harlan County Judge-Executive Dan Mosley brought the magistrates up to speed on the project.

“I had asked a representative from the Kentucky Transportation Cabinet to attend the court meeting today as they weren’t able to attend the previous meeting due to the weather,” Mosley said. “I called again yesterday to express some more concerns to the chief district engineer of District 11 in Manchester concerning the KY 72 project.”

Mosley explained there had been an emergency issue recently related to the project.

“There was an emergency situation up there the other day,” Mosley said. “Someone needed through and it took longer than it should have for them to be able to travel through there. That’s not acceptable. So I voiced my concerns again to the chief district engineer, who then informed me they have utilized all the funds that were committed for that project, it’s over budget, and that project is ending.”

Mosley said he was advised crews will cease chipping in the next few days and cleanup will begin.

“It will take two to four weeks to have the whole area cleaned up, but they are moving out of there,” Mosley said. “They ran over what their initial cost estimates were and they recognize it’s been a significant inconvenience.”

Mosley addressed why the option of an alternate route was not provided.

“I felt like they could have done a creek crossing that would have allowed them to shut down that road completely and provided an alternate route,” Mosley said. “He said it would have made the cost greater on the project and they would have had to have replaced black top on the county roads they would have used to make the detour.”

Mosley told the court he asked if there were any safety issues with stopping the project at this point.

“They have studied it and they feel like it is safe, and much safer than it was previously,” Mosley said. “They feel like they’ve reached a point where they can move on.”

The project has left a large amount of rock, dirt and other waste material in the nearby creek.

“One other thing I addressed with him is they pushed a lot of material down in the creek, which concerns me about potential flooding,” Mosley said. “That needs to be cleaned out and put back to the way it was before they came there. We’re certainly going to keep an eye on that and voice any concerns.”

A man and a woman are facing charges including fleeing from police and auto theft after police responded to a... read more