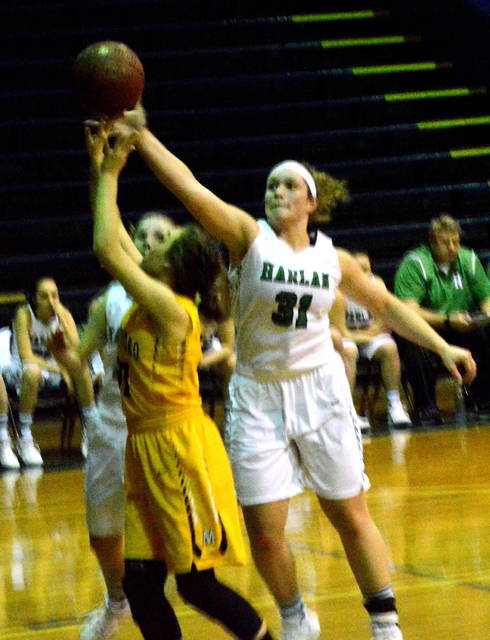 Mackenzie King gets a block during Thursday’s game. The senior forward finished with a game-high 28 points during Harlan’s 59-55 victory over Middlesboro.

Harlan stayed alive for its fifth straight 13th Region All “A” Classic title by holding off Middlesboro on Thursday in the semifinals at Oneida Baptist Institute.

After trailing by as many as a seven points in the fourth quarter, Harlan put together a 10-2 run with less than four minutes to go to claim the lead. Middlesboro made a couple of costly mistakes down the stretch, and Harlan claimed the 59-55 win on Thursday to advance to the 13th Region All A championship.

“On paper it may be a loss, but you have to look at the positives at this point. Compare the last game with Harlan with this game, it’s completely different. We scored six points in the first half against them the first time we played,” said Middlesboro coach Bethany Evans. “That shows me that they’re getting better, (and) they’re working hard. They played tonight harder than I’ve seen them play in a long time. They wanted to win for once, and that’s what counts.”

It was the seniors the led Middlesboro against the Lady Dragons. Hannah Warren finished the night with a team-high 16 points while going a perfect 6-for-6 from the charity stripe. Jamayha Poe added 15 points to the scoreboard.

Mackenzie King was the force that kept Harlan in the game. The senior forward ended the night with a game-high 28 points. Noah Canady scored 14 points while making five baskets from the field.

The Lady Jackets held a slight 10-8 lead after the first quarter. Harlan opened the second with a pair of baskets from King and Canady to claim a 12-10 advantage. The Lady Dragons extended that lead to 15-12 after a King layup and a Canady free throw.

Middlesboro responded with a 3-pointer from Poe to knot the game up at 15-15. The two teams traded baskets with an old-fashion three-point play from Natalee King giving Harlan a 20-17 lead with 3:17 remaining in the half. A pair of free throws from the sophomore increased the lead to five, 22-17.

The Lady Dragons’ lead grew to as much as seven after two more free throws from Natalee King gave Harlan a 26-19 lead with 1:25 left in the second.

The Lady Jackets ended the quarter on a 6-0 run with Warren capping it off with two free throws to cut the halftime deficit to 26-24.

The third quarter was about as even as it could get. There were four lead changes and five ties during the period with both teams finishing the quarter with 12 points. Harlan took a 38-36 lead into the final period.

A long two-point jumper by Poe tied the game at 38-38 to start the fourth. Payeton Charles nailed a 3-pointer to give the Lady Dragons a 41-38 lead.

Middlesboro followed the three with a 7-0 run to claim a 45-41 lead. Warren scored five points during that stretch with Grace Gent hitting a pair of free throws.

A Mackenzie King layup cut the deficit to two before a 3-pointer from Burke and a layup by Owens gave the Lady Jackets a 50-43 lead with little over five minutes to play.

From the point forward, Harlan began to surge. After trading baskets, Mackenzie King and Canady provided a spark the Lady Dragons needed to win. A 3-pointer by Canady cut the lead to 52-48. King hit a layup to cut the lead to two, 52-50.

Middlesboro scored on an Owens layup, but Harlan answered with a Mackenzie King layup and a 3-pointer from Canady to give the Lady Dragons a 55-54 lead with a little over a minute to go in the game.

On the ensuing possession, Poe drove to the basket but was called for a charge to return possession to Harlan. The Lady Dragons couldn’t capitalize as Poe got a steal on the next possession and was fouled on the breakaway.

Coming out of a timeout, Middlesboro began moving the ball around looking for a shot. Baylee Woody created separation and attempted a step-back 3-pointer, but the shot bounced off the rim.

The Lady Dragons grabbed the rebound, and Katelyn Burkhart was fouled. She hit both of her free throws with 10.6 seconds remaining to secure the victory.