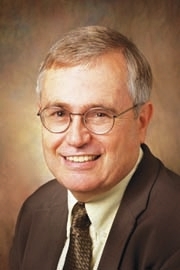 House Republicans fear Hoover as speaker could damage GOP, distract them from business

LEXINGTON – House Speaker Pro Tempore David Osborne’s speech at the Kentucky Chamber of Commerce’s annual legislative dinner Thursday night was the shortest but the most intriguing.

“I still can’t get used to hearing titles associated with my name,” said Osborne, the Prospect Republican whom Speaker Jeff Hoover is letting act as speaker during investigation of the circumstances that led to Hoover’s private settlement of a sexual-harassment claim, a claim he has since denied.

Osborne said that when he first went to the House 12 years ago, he mused to his wife that he might someday be speaker, and she replied, “When hell freezes over.” He added, “But given the weather and the news that we’ve seen this week, she may have been more the prophet than I possibly imagined.”

After more or less referring to himself as speaker, Osborne made other remarks that reflected the growing discomfort among House Republicans with Hoover’s decision to hold in abeyance the resignation that he announced in November, after the Courier Journal revealed the settlement. (He couldn’t formally resign until the House convened Tuesday.)

Osborne told the record crowd of 1,600, “The actions of a few have sullied the reputations of many,” adding later, “Even as our collective reputations have suffered, our task remains the same; we serve the public; we live up to our promises; we put the interests of the people, the taxpayers, before those of our own.”

As Osborne briefly discussed issues facing the legislature, he said “Completing these tasks is what is required for us to restore the reputation” of the House. He promised, “We will institute reforms that will make the state Capitol a better place to work, and a safe environment, for all those who choose to serve Kentucky.”

Osborne’s remarks, especially the one about the damage to “our collective reputations,” indicated that House Republicans’ concern about who leads them has morphed into concern that Hoover’s stance might damage them politically and is distracting them from the people’s business. Even some of Hoover’s friends say privately that he is losing support to retain the speaker’s post.

The episode has further opened a breach that had been growing in the Republican Party between supporters of Hoover and Gov. Matt Bevin, who said when Hoover announced his resignation that he and the other three members who made the settlement with an employee should resign from the House.

Hoover still had support, or at least sympathy, as shown by the state Republican Central Committee’s rejection of Bevin’s request that it call for the resignation of any legislator who had settled a sexual-harassment claim. Then a majority of House members told Bevin he shouldn’t call a special session on pensions; they had concluded that his proposal to solve the pension crisis was unpopular.

Meanwhile, some of Hoover’s allies urged him to delay any final decision on resignation until the Legislative Ethics Commission completes its investigation of him, which they hope will confirm his assertions that he and a female staffer “engaged in inappropriate text messages” but never in “unwelcome or unwanted conduct” or “any sexual relations of any kind.”

He followed his allies’ advice, saying Tuesday that his November announcement “was made primarily to protect House members from the intervention of the executive branch into purely legislative matters.”

But things turned at midweek, when the ethics commission postponed its Jan. 9 meeting to Jan. 16, and eight House Republicans – including two committee chairs – filed a petition for Hoover’s expulsion, setting up an investigative committee with an uncertain completion date. The added uncertainty only added to the turmoil and discomfort in the House.

Friday morning, Hoover acknowledged growing concern among House Republicans about the situation. “I sense the caucus is becoming divided between those who are allies of the governor and those who are strong advocates for legislative independence,” he said in an interview, adding that he fears the division will be manifested by primary challenges to Republican incumbents from Bevin allies.

Hoover has been the legislative leader most willing to challenge Bevin, at least in public and probably in private, and that has not set well with a governor who likes to tell others what to do. (Disclosure: Hoover is my sister-in-law’s brother.)

So what does Hoover plan to do now? “The last thing I want to ever do is be a distraction to the General Assembly,” he said. “The institution has been very important to me for 21 years. I love the institution and what it does, and based on the developments of this week, specifically with regard to the Legislative Ethics Commission postponing their hearing, I will make the appropriate decision very soon.”

Al Cross, former C-J political writer, is director of the Institute for Rural Journalism and Community Issues and associate professor in the University of Kentucky School of Journalism and Telecommunications. His opinions are his own, not UK’s. This column previously appeared in the Louisville Courier-Journal.

How to have a happy new year

Once upon a time, I hated New Year’s Eve. It meant that I had to make some vow to change,... read more