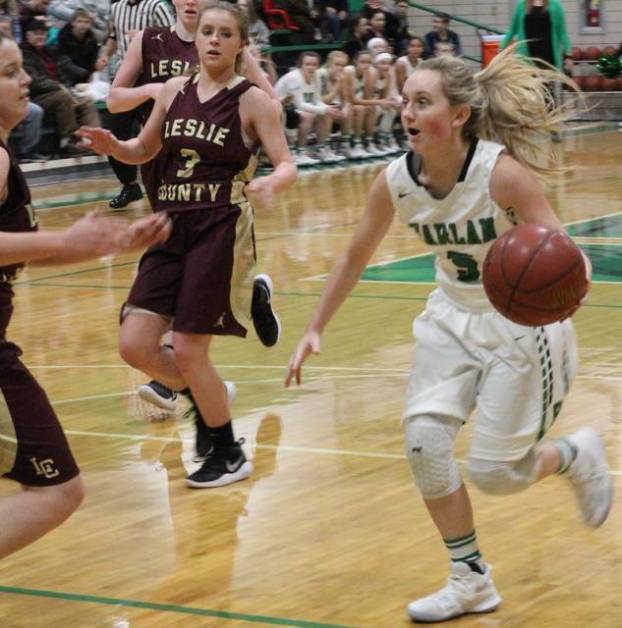 Harlan junior guard Payeton Charles and the Lady Dragons will open defense of their 13th Region All “A” Classic title on Monday against Red Bird at Oneida Baptist.

Harlan opens defense of All ‘A’ title

Tiffany Hamm may be a first-year coach, but she needs no explanations about the importance of the All “A” Classic to Harlan High School and other Class A schools.

Hamm played on three Class A regional championship squads as a player in the 1990s and understands the significance of the tournament. Harlan has won the last four regional titles in Class A and seven of the last eight and will be one of the favorites again this year, along with Pineville and Williamsburg, when the tournament opens Monday at Oneida Baptist Institute.

“The All A is something our players have been excited about and looking forward too,” Hamm said “HHS girls have a rich basketball tradition and much of that has been steeped in the All A. Past and current Harlan players have experienced a ton of success at the region and state level, so that provides confidence and experience going into the tournament. Class A schools are passionate about proving their place among the best small schools in the state.”

Harlan has four starters back from last year’s squad that advanced all the way to the All “A” state finals before falling 61-55 to Monroe County. Senior forward Mackenzie King is the top-ranked player in the Class A tourney and is joined by senior guards Noah Canady and Taylor Simpson and junior guard Payeton Charles. Sophomore forward Natalee King and senior center Brandi Haywood have also played key roles for the 6-7 Lady Dragons, who are the favorites in the upper bracket. Harlan will play Red Bird in the opening game Monday with Barbourville taking on Middlesboro in the nightcap.

Oneida Baptist plays Lynn Camp in the opening game with a Williamsburg-Pineville showdown to follow. Both the Lady Jackets and Lady Lions have been ranked among the region’s top eight teams most of the season and both like their chances to succeed Harlan as regional champs.

“In order for us to continue our streak of consecutive All A region titles we will need to be disciplined in our defensive schemes and play with confidence on offense,” Hamm said. “I’m looking forward to seeing our kids compete in the tournament format and for a championship.”

The semifinals of the tournament are set for Thursday with the championship game scheduled Friday at 7 p.m. The 13th Region champ will play the Region 2 champ on Jan. 24 at 1 p.m. at McBrayer Arena on the campus of Eastern Kentucky University in Richmond.

All “A” Classic pairings

All “A” Classic champions

Harlan ran its record to 15-0 and captured the 13th Region All “A” Classic title in the fifth- and sixth-grade... read more