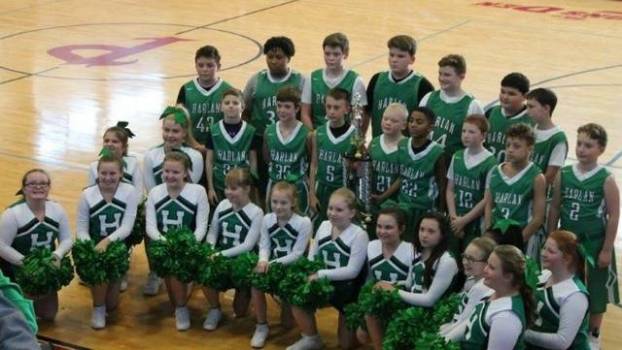 The Harlan Green Dragons are pictured with their championship trophy after defeating Pineville and Middlesboro to win the fifth- and sixth-grade division of the 13th Region All “A” Classic.

Harlan ran its record to 15-0 and captured the 13th Region All “A” Classic title in the fifth- and sixth-grade division at Pineville by defeating Pineville 47-30 in the semifinals and Middlesboro 28-12 in the championship game.

“Pineville and Middlesboro are both good teams,” Harlan coach Lonnie Huff said. “With them being in our division of the conference, we had to play them twice. So, we had to go through both of them again in the tournament. To beat the second and third best teams in your conference three times in a season speaks a lot about your team. To sweep the regular season and win the conference tournament is special.”

Noah scored 16 in the championship game in what Huff described as a “defensive struggle.”

“Trent was aggressive and took the ball to the hoop and scored on some tough shots,” Huff said. “Maddox was being face-guarded all over the court, but he didn’t force it. He had a good some good passes and handled the ball well. He leads us in assists for the year and did again in the tournament (10 assists in the two games). Will Cassim played big in the paint. He pulled some tough rebounds and scored some for us. Dylan Cox and Nate Montanaro played well. They both scored and played well on defense.”

LEXINGTON (KT) — Kentucky has proven it belongs in the middle of the pack in the Southeastern Conference with back-to-back... read more