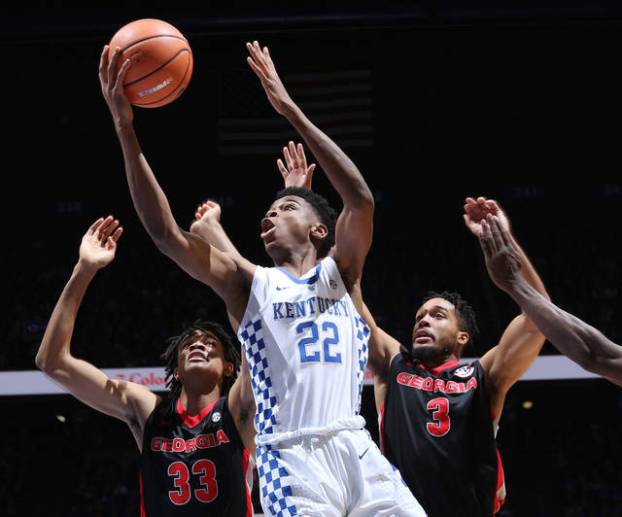 LEXINGTON (KT) — Shai Gilgeous-Alexander is making a name for himself and his teammates aren’t surprised he has emerged as Kentucky’s top player as the Wildcats delve deeper into the Southeastern Conference schedule.

Gilgeous-Alexander credits his improvement to paying more attention to detail and spending more time evaluating his own play, especially following Kentucky’s loss to UCLA in the CBS Sports Classic in New Orleans on Dec. 23.

“I’ve watched film a lot lately and, after the UCLA game, I realized there were spots where I let the defense off the hook and stuff like that where I could’ve attacked them and put pressure on them,” Gilgeous-Alexander said. “I’ve just tried to take advantage of that in these last two games.”

Following Kentucky’s win over the Bulldogs, the 10th straight over its conference rival, Kentucky coach John Calipari said Gilgeous-Alexander is the team’s top player at the moment, but Gilgeous-Alexander took a low-key approach to the heap of praise from his coach.

“I don’t really worry about it too much, honestly,” Gilgeous-Alexander said. “I know coach is a good coach and he’s gonna put all of us in the position to be successful as a group and as individuals, so I’m not worried about that.”

Calipari credited Gilgeous-Alexander’s recent success to his ability to block out the noise and his continuous smile. Gilgeous-Alexander said he’s “thankful for the opportunities that I get, so I’m just always smiling.”

“I just know that I’m blessed amongst a lot of people in the world,” he said. “I’m just thankful for the opportunity, so I have no reason to worry about what everyone’s saying on the outside or the expectations for me. I just want to play basketball and do the thing that I love.”

Kentucky, which plays at LSU on Wednesday, had the day off Monday and Gilgeous-Alexander said the Wildcats can build on the lackluster performance against the Bulldogs.

“I think it was a really good win for us,” he said. “We fought through adversity, obviously, in the first half and I think we showed a lot of guts for a team mostly with freshmen. I think it was a good learning experience to go back and watch film and stuff and really build on this win.”

Quotable: “That game wasn’t emotional. They steamrolled Louisville. That game wasn’t emotional for Kentucky. They sat there in the second half and drank Gatorade. That wasn’t an emotional game in my opinion. They weren’t drained, guys didn’t play huge minutes, they were as fresh as could be. I don’t think that was emotional in my opinion at all. Now I wasn’t here, you were so I may be inaccurate in that but that’s what I think,” Georgia coach Mark Fox on playing Kentucky following the Wildcats’ 90-61 win over Louisville two days earlier.

The Good, the Bad and the Ugly of some holiday leftovers. —Good: At first, it sure was a little odd... read more