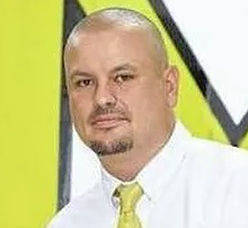 When my family moved across Harlan County to a little place called Teetersville, we were the first family to build a home in Meadowbrook Estates. I didn’t know a soul out there. No friends and no family, other than my sister and parents. Needless to say, I wasn’t too happy in my new digs.

But that was fixing to change.

My childhood best friend was moving with his family into their new home in the neighborhood. His dad was a basketball coach and got my parents to sign me up for little league basketball. That’s all it took. I was hooked. I was in love. In love with hoops and everything it entailed.

But I hadn’t watched a lot of basketball on TV. Back then we had three or five channels, no ESPN, and I watched whatever we could pick up on the 10-inch Philco black and white TV in my bedroom.

So it was with some excitement I showed up at my friend’s house to watch my first basketball gamee on TV. That first game would be on March 26, 1983. Kentucky vs. Louisville from Stokley Athletic Center in Knoxville, Tenn.

This game wasn’t just another matchup between two blue bloods. It was during the Mideast Regional of the 1983 NCAA Tournament. The winner advanced to the ‘83 Final Four. Everyone I knew were amped up for the game — The Dream Game.

It didn’t take me very long to realize that a) basketball in Kentucky was important to nearly everyone and b) everyone I knew were fans of the University of Kentucky Wildcats.

I learned a lot of other things about Kentucky basketball as well. First, you turned the volume down on the TV and turned into WHLN-AM from Harlan and listened to Harlan native and the Voice of the Wildcats Cawood Ledford call the play by play. I still hear his golden voice in my mind. Next, I learned that everyone I knew were not rooting for Louisville. I think I first heard U of L called little brother in this time frame. Lastly, I found that talking during the game was strictly prohibited except to root loud and proud for the Cats.

I’d like to tell you Kentucky came out as victors that night in Knoxville, but alas, the Cats fell to the Cards 80-68 in overtime. Kentucky fans were upset, of course. But this young fan and player was hooked. I was in love with UK, in love with the excitement, and most of all, I was in love with basketball. We’ve been going steady for over 30 years.

On Friday, Dec. 29, No. 16 Kentucky will host acting head coach David Padgett and his Louisville Cardinals, ranked No. 29, in a Rupp Arena showdown. The 1 p.m. rivalry matchup will be televised by CBS.

Harlan ran into one of the state’s hottest teams in the first round of the Lake Cumberland Holiday Hoops Classic... read more