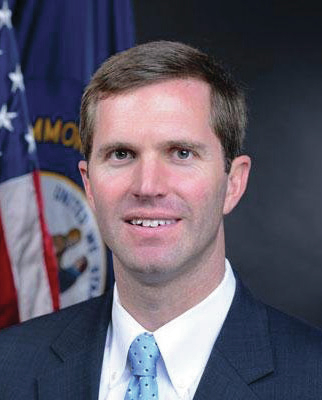 The meaning of protecting the people of Ky.

Building a better, safer Kentucky for generations to come is what inspired me to public service.

My team and I in the Office of the Attorney General are doing just that by broadening our four-part mission of tackling the opioid epidemic, shielding children from abuse, seeking justice for survivors of sexual assault and helping senior citizens avoid scams.

To me, our state’s opioid epidemic is very personal. I lost a neighbor to addiction and have dozens of friends who have lost a child to a fatal overdose. I have even helped pull a man from a car who was overdosing on the streets of downtown Lexington.

Working to hold those accountable who helped cause this pain is what drives me every day.

My friend Emily Walden lost her son, T.J., because of an Opana ER overdose in 2012. T.J. was a solider in the Kentucky National Guard, and overdosed on the drug and died shortly before he was to deploy overseas.

When I met Emily over three years ago, I immediately began taking steps to work with her. And, in November, she joined me to announce a lawsuit my office filed against the manufacture of Opana ER.

Emily said, “It’s time these drug companies are held accountable for what they’ve done. This bunch has literally caused death and destruction in communities like Louisville, all across the United States. My hope is that lawsuits like this will finally hold them accountable for their unethical marketing and promotion of these drugs, so that no other mother will have to walk through the fire they’ve caused me to endure.”

This lawsuit was the first of many that my team and I are working to file against manufactures, distributors and retailers that have contributed to the opioid epidemic.

We also take great pride in protecting Kentucky’s children. We have nearly tripled the number of child sex offenders we removed from Kentucky communities. We also focus just as hard on prevention, and have heard from so many Kentuckians about what they think of the work we do together.

Like when Suzanne, an Eliza­bethtown teacher, talked about the impact of receiving training our office funded on how to recognize, report and educate others on child abuse.

“Upon returning to the community our group was able to present additional training to early child­hood intervention paraprofessionals who work with vulnerable families and children in Hardin County. The group also presented to Family Resource and Youth Service Center coordinators, as well as, a small group of licensed mental health professionals in the region,” she said.

In total, our office has trained more than 2,500 Kentuckians on how to prevent and report child abuse and human trafficking. We have also provided more than $420,000 in grants to support child abuse victims and prevention programs throughout the state.

In seeking justice for victims of sexual assault, we secured funding to end the rape-kit backlog and formed new partnerships aimed at prevention. This year, we secured a nearly $3 million federal grant to create a sexual assault cold case unit in our office focused on investigating and prosecuting sexual assaults, while providing key services to victims during the cold case process.

Michelle Kuiper, vice chair of our office’s Survivors Council, said about the grant award, “I like to think that my state of Kentucky is now doing something that we’re in the forefront – we’re not the last. We’re not the last to implement. We’re not the last to pass a law. We are now creating change, and we are now in the forefront of that. To think that we were one of 17 to receive this grant is amazing. I think of all the change this is going to create. And, for me, justice looks different for every survivor, but justice should be the default and not the rarity and that is what we are talking about today.”

When it comes to protecting our families, especially senior citizens, from scams and fraud there are thousands of Kentuckians that know firsthand how our office is catching scammers and returning money back to victims.

When a Kentucky veteran was being scammed, his daughter, Terri from North Carolina, reached out to our office for guidance. “I lost count of the Kentucky agencies which should have been able to help him but didn’t. Or, how many times I was transferred to someone else, somewhere else who had no clue why I was bothering them. There was no help. No guidance. No hope. Then someone transferred me to the Kentucky Attorney General’s office. And finally, action.”

Each day in the Office of the Attorney General, we return an average of $1,800 back to Kentuckians, including money lost to scams and from disputes and grievances with national and local businesses. We also work to reach settlements with companies or businesses who violate the public’s trust.

As part of our settlement with Louisville-based Bryant Heating and Cooling to resolve alleged violations of the Kentucky Consumer Protection Act, we received a note from an 81-year-old Kentuckian named Ann, who, because of our agreement with Bryant said the company returned to her home “to make things right.”

Each of these people and their stories, along with so many more, are the reason why the Office of the Attorney General is working to make Kentucky safer. We thank everyone for the time they take to reach out to our office for help, and I gladly welcome the opportunities in the weeks, months and years ahead to continue to serve every community and family across the Commonwealth.