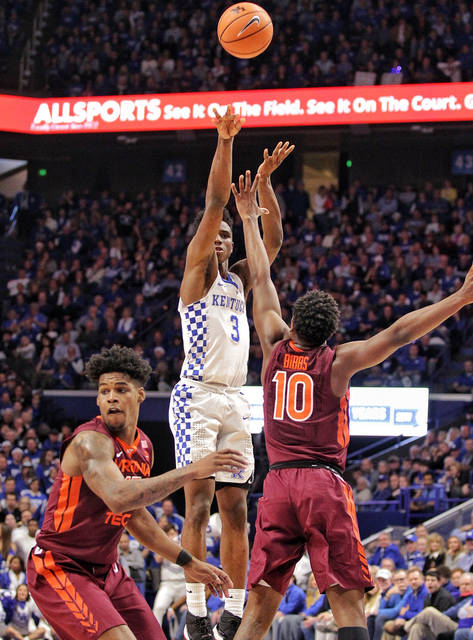 Hamidou Diallo is averaging 20.3 points a game during the past four contests and knocked down four 3-pointers in a win over Virginia Tech last weekend.

Hard work paying off for Diallo

LEXINGTON (KT) — Hamidou Diallo is buying into what it takes for Kentucky to be successful and it’s showing in the court.

The secret to Diallo’s recent success, especially during the past four games, has been simple.

Diallo, a redshirt freshman, was named Southeastern Conference Freshman of the Week Monday after scoring 20 points, grabbed five rebounds and connected on a career-high four 3-pointers in the win over the Hokies. Diallo swished two of those treys in the final five minutes that helped the Wildcats maintain a lead down the stretch.

“We (were) just were playing regular basketball,” Diallo said. “(We were) just playing basketball and just taking what the defense (gave) us.”

Although known for his leaping ability and long wingspan, Diallo also doesn’t mind shooing from the perimeter. Diallo has been more selective when it comes to his 3-point shooting, a key to his recent emergence.

“(Coach John Calipari) was never on me about shooting threes,” Diallo said. “It was just the type of threes I was taking and improving the quality of my shots. That’s what I have been working on and I’m just going to keep trying to improve on that and keep practicing the way I have been practicing and just keep being motivated.”

The freshman guard scored a career-high 23 points in a 93-76 victory over Monmouth in front of family and friends on Dec. 9 at Madison Square Garden and has scored 19 points or more during the past four games and is averaging 20.3 points per game. Diallo has made 30 of 56 field goal attempts.

Diallo credited his success to “my teammates and coaches.”

A struggle early, the Wildcats have won by double digits in three of the past five games. Diallo said the all-freshman lineup is starting to come together with two non-conference games remaining against UCLA and Louisville, before opening league play against Georgia on New Year’s Eve.

“We knew it would take a little while for us to start jelling and bonding with each other,” he said. “We have a bunch of players that always were the number one option on their team. So for all of us to be on one team now, we gotta buy in and it’s going to take time. We’re just going to keep getting better at it, keep practicing the way we’ve been practicing and just keep trying to get better.”

The seventh-ranked Wildcats take on UCLA Saturday in New Orleans before taking a brief Christmas break. Diallo said the current stretch of games will give the Wildcats a chance to improve their confidence level.

“I feel like is a big stretch for us to build our confidence going into January and just to build a bond with each other,” he said. “That’s the biggest thing for us.”

COOKEVILLE, Tenn. — Tennessee Tech would’ve liked to have closed the non-conference portion of its schedule on a two-game win... read more