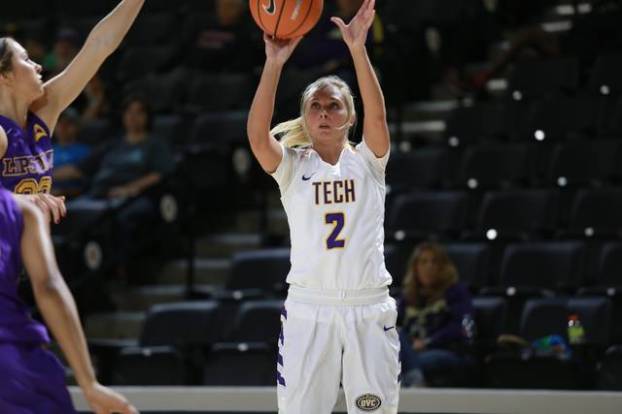 COOKEVILLE, Tenn. — Tennessee Tech would’ve liked to have closed the non-conference portion of its schedule on a two-game win streak, having defeated Winthrop in a 70-41 blowout on Tuesday morning.

Instead, Tech dropped a tight 61-57 game to Lipscomb (3-10) on Thursday night in the Hooper Eblen Center and will head into OVC play with a 3-8 record.

Tech outscored Lipscomb 33-28 in the second half, including 24-14 in the fourth quarter, but it was again the Golden Eagles’ inability to put together a full game that hurt them.

The Golden Eagles forced just eight Lipscomb turnovers while giving up 16 of their own – while that’s one of their lower totals this season, it’s still not where Tech would like to be. In two of the four quarters, Tech shot below 40 percent, with its worst shooting percentage coming in the third quarter at 28.6 percent (4-of-14).

“We’ve yet to put four quarters together,” said coach Kim Rosamond. “Outside of the run that we made in the fourth quarter, we struggled on both ends of the court tonight. When you hold a team to 61 and you’re only scoring 57 points, it’s going to be tough to win basketball games.”

For Tech, freshman Jordan Brock was named the First National Bank of Tennessee-Special Olympics Player of the Game, coming off the bench to hit three 3-pointers and collect 12 points and four rebounds. Like she’s done in games before, Brock hit 3s when Tech needed them most, sending the Golden Eagles on various runs throughout the game.

“Jordan stepped up and really ignited our offense,” said Rosamond, “but this is the thing – we can’t rely on the 3 so much, especially when we’re struggling from it. I thought Jordan stepped up and made some huge, huge shots, and we’ve got to also find other ways to score with Jordan being able to hit the 3.”

Yaktavia “Shug” Hickson led Tech with 15 points and seven rebounds, while Kesha Brady added 11 points for her sixth-straight double-figure game and two rebounds in a team-high 37 minutes of play.

While the record it sports through non-conference play is not one the team’s happy with, it’s no question that Tech has been battle-tested heading into the OVC season. In the most recent NCAA RPI release on Dec. 17, Tech has played the 36th-hardest schedule in the country and is one of just three conference teams with a strength of schedule in the top 100.

“The positive is there’s still a lot of basketball left to be played, and when we come back here Dec. 28th, it’s 0-0,” said Rosamond. “It starts all over for us.”

Tech will take some time off for the holidays before opening up its conference and double-header schedule on Thursday, Dec. 28. Both Tech basketball teams will take on Morehead State, with the women facing the Eagles at 5:30 p.m. CT in the Hooper Eblen Center.

LEXINGTON (KT) — John Calipari isn’t sure what to expect when his team takes on UCLA Saturday, but the Kentucky... read more