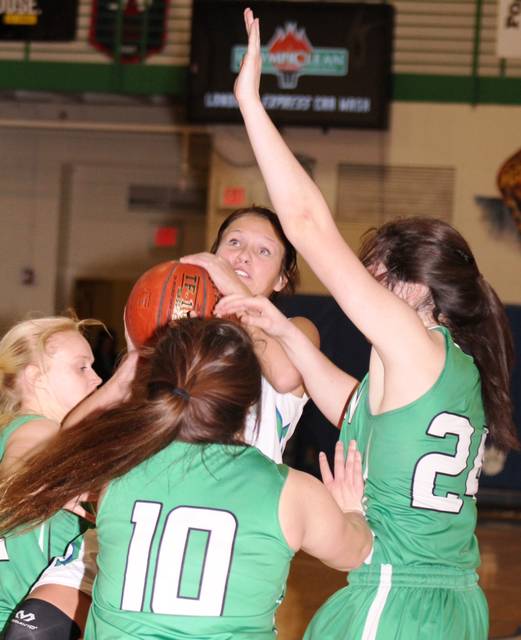 “Overall, to have Hannah Lawson in foul trouble and Madison Sheppard in foul trouble early, Isabel (Gray) not playing her best game, I thought Gracie Jervis, Taylor Combs, and some other people really stepped up,” North Laurel coach Eddie Mahan said. “It shows the depth of our team.”

Also in double figures for the Lady Jaguars were Jervis with 15 points, Combs 13, and Courtney Carroll 12.

“We left a lot of points out there. I can’t tell you how many layups we missed. It was probably some nerves from some players that were trying to get going,” Mahan said.

Still it marked a season high for North Laurel. It also pushed them over .500 with a third straight win (3-2).

“This was a good win, and I think our kids are starting to feel like they are back to being a top-tier team again,” Mahan said.

The Lady Dragons are off to a similar start. After dropping their first two games, they won three straight just like North Laurel. Tuesday’s loss evens their record at 3-3.

“Harlan is a pretty good team. They might not be the same they were with a Jordan Brock by any means, but they are still a very physical team. They are a team that competes and knows how to win,” Mahan said.

The Lady Dragons matched North Laurel shot for shot early. The Lady Jaguars largest lead in the first quarter was 22-17 on a late three-pointer by Sheppard. One reason Harlan stayed close was senior forward Mackenzie King, who scored 17 of her 27 points in the first half, but managed just two field goals in the second half.

“There are two things they rely on, (MacKenzie) King and 3s. I knew King was going to get some of hers, and you aren’t going to stop a good player like her completely, but 3s we definitely should have cut out,” Mahan said.

Three pointers were keeping Harlan close. Mahan thought it came down to poor execution of a zone defense that should have aggressively challenged shooters.

“Defensively, we were not very good tonight. We caused some turnovers, but we left open shooters and I’m sick of seeing that. We’ve got to change that,” Mahan said.

A three-pointer by King with 5:38 in the half had Harlan within 28-25. They would not get closer with the North Laurel defense holding them to just four points the rest of the half.

King’s 3-pointer was answered by a three-point play from Jervis, a common theme for the night.

“She was the big answer tonight. She was definitely the one that every time they did something she countered. That’s a player for you. That’s someone that steps up and has a competitive fire,” Mahan said.

Five times on the night, Jervis answered a Lady Dragon basket with one of her own.

“She’s been playing for me for so long, but she’s just a sophomore. She’s just now learning how to take care of some of those situations,” Mahan said.

North Laurel took control of the game by scoring the last 12 points of the half. Three-pointers by Sizemore and Carroll in the final minute gave North Laurel a 45-29 halftime lead. The lead grew to 58-36 after three quarters with Jervis twice hitting three-pointers after a Harlan bucket. The final margin was North Laurel’s largest lead.