Calipari likes having Hall around program 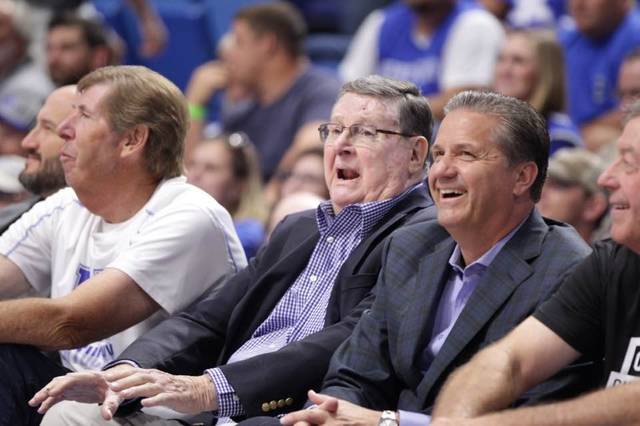 Kentucky coach John Calipari shared a laugh with former coach Joe B. Hall during a charity game earlier this year. Calipari likes having Hall, now 89, around the program.

LEXINGTON (KT) — John Calipari always has someone watching his back and he doesn’t mind former Kentucky coach Joe B. Hall lurking over his shoulder, especially behind the scenes.

“He’s been a great supporter of mine,” Calipari said. “(I) love seeing him in the gym. Love hearing what his thoughts. I’ve been blessed that I’ve had guys that have never tried to overwhelm me or be over opinionated. But, I listen to their opinions.”

While at Massachusetts, Calipari leaned on late Minutemen coach Jack Leaman and the two coaches would share thoughts during a coffee break. While at Memphis, Calipari shared coaching ideas with late UAB coach Gene Bartow. Calipari said he and Bartow shared a common bond and often discussed coaching ideas and theologies.

“Coach Hall is kind of the same way,” Calipari said. “If I ask him he’s going to tell me. He called and we talked the other day and we were talking about guard play and he said, ‘This is what you’re trying to do isn’t it?’ And I said, ‘Yeah.’ He said, ‘That’s what I thought.’”

Calipari likes the thought that Hall, who recently turned 89-years-old, remains active in the community and succeeded in following the late Adolph Rupp as men’s basketball coach at Kentucky and did so seamlessly. Hall compiled a 56-6v record in a two-year span from 1976-78 and led the Wildcats to their fifth national championship in 1978. Hall went 297-100 in 13 seasons.

“You know he’s in this community,” Calipari said. “He’s one of those guys — who else would have followed Adolph Rupp up here? Dude had to follow Adolph Rupp. What he’s done for this University, for this state, Cynthiana, he deserves our adulation. And that’s what we do. And the same, I love it when he does the ‘Y’ and people go crazy on his birthday. They’re singing ‘Happy Birthday.’ He deserves all of that. He earned it.”

Calipari doesn’t mind having former coaches and players around the program and embraces the school’s past tradition.

“I’m good with that,” he said. “Now there are some who are trying to convince that that’s not who I am, but I’ve kind of been this way for 30 years. It’s hard to lie for 30 years. You can try, but it’s a hard thing to do. So having former players to let them know this is their program, and we’re here carrying on their tradition, and they’re always welcome in here, and I’ve been blessed to have a Joe B. Hall, a Jack Leaman. You know even at Memphis when you were trying to come into a situation and Gene Bartow, who was one of the great gentlemen, but he was good to me when he was at UAB. He treated me, it’s kind of like you didn’t know why was he being so kind? But he always was kind to me even before I got to Memphis, but I’ve been blessed in that way. “

Calipari also keeps in contact with his former players and often gives them his advice.

“The former players know and my own players know they’re welcome here,” he said. “I was on the phone with Derrick Rose for 40-50 minutes the other night. He and I just talked about life in general and different things. If you’re doing this for any other reason would you look at the end of your life and say ‘man, I just wasted 60 years.’ I mean, you think about it, if your legacy is how many wins I have or national championships and then you’re lying there thinking, ‘What in the world did I do this?’ vs. how do you make it about how do you leverage your position into help, which is what I’ve tried to do. Not always successful, but I’ve tried.”

Looking for a leader

Eight games into the season, Calipari doesn’t have a clear leader on and off the court. The eighth-ranked Wildcats (7-1) have a variety of players to choose from when it comes to taking on the leadership role, but Calipari isn’t forcing the issue on his players or his all-freshman starting five.

“That thing’s shaking out and it’s not there yet,” he said. “I’d like to see that we have five, six, seven guys who could step into leadership roles if they need to. That’s just going to happen over time. But I think all of them have gotten better. We’ve gotten better as a team and they’ve gotten better as individual players. Which is how you get better as a team, individuals start playing better and they’re doing that. You just can’t – you’re not skipping steps; you’re not forcing it more than it is. We are where we are right now. Now it’s OK, how do we continue to get better?”

“It evolves,” he said. “I could want this guy to be a leader, but they don’t want to follow that kid. They want to follow this kid. So it kind of evolves. Teach them all what it means to lead, you serve everyone if you want to lead, that you got to be one of the first ones out there and the last ones to leave. You’ve got to want to be coached and let them see that you’re working hard and that you’re about them. That you’re not just about yourself. Can’t lead if that’s who you are.”