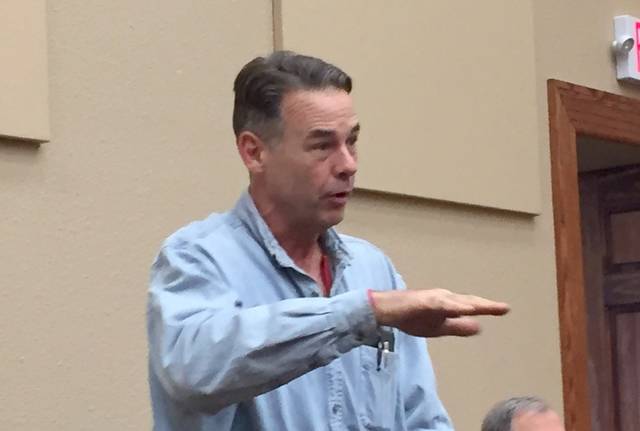 Harlan County resident Tim Rice addresses the fiscal court concerning the possibility of elevating KY 6258 at Tway Hollow during a meeting on Tuesday.

The Harlan Fiscal Court heard a proposal from a resident concerning an issue with the road leading to Tway Hollow during a meeting on Tuesday.

Harlan County Judge-Executive Dan Mosley recognized resident Tim Rice, who proposed raising the level of the roadway to equal a large lot which is currently being constructed near the site.

“I thought it was a city street,” Mosley said. “After investigating it, we found out that’s actually a state road all the way to the railroad tracks.”

“We could draft a letter to the state transportation cabinet asking them to address the elevation of that road,” Mosley said. “It’s my opinion it really needs to be a two-lane road up to the railroad tracks because of all the increased traffic that’s going to be over there.”

Rice explained when the road was built, many of the nearby businesses such as Walmart, KFC and Pizza Hut were not in their current locations.

“We’ve also got a post office box, right now it’s right behind the guardrail in that curve on a busy intersection,” Rice said. “Of course, when that was put in, there was no Walmart or KFC there and it made sense. But it certainly doesn’t now, and it was my thought it we could get all that raised up through there to that one level, it would be a good place to have an off lane where they could put the box.”

Mosley asked Miller how much fill material would be required to elevate the road.

“We could figure it easily, but you do know the work they’re doing on KY 72, all that is waste material,” Miller said. “They’re just hunting places. They’ve done several parking lots and now they’re hauling it down to the state garage. That would work.”

Mosley added the KY 72 project is not expected to be completed until early next year.

“We could draft a letter, if you all are supportive of that road being raised, to the transportation cabinet,” Mosley said.

Miller said the letter should also reference using the waste material from the KY 72 job.

Magistrate Jim Roddy made a motion to draft a letter to the Kentucky Transportation Cabinet requesting the road be raised of KY 6258 going into Tway Hollow. The motion passed with no opposition.

• A modified agreement between the Kentucky Transportation Cabinet, the Kentucky Department of Corrections and the Harlan County Detention Center for roadside inmate work crews was approved;

• An agreement with the Kentucky Transportation Cabinet for road salt was approved;

• Pete Cornett was reappointed to the Harlan County Economic Development Board for a term of four years;

• Drew Adams was appointed to the Harlan County Economic Development Board for a four-year term; and

• Polly McLain was appointed to the Harlan County Tourism Commission to fill an unexpired term expiring on Oct. 20, 2016.