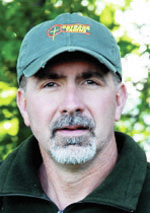 I had been in the stand only 15 minutes when the doe appeared. When it crossed the path I came in on, she immediately smelled an unfamiliar odor and followed it with her eyes to my tree stand. Now, she was at full alert, trying to bring into focus the blob that was in the tree. She moved to my left trying to wind me but was unable to satisfy her curiosity until I had come to full draw. I landed what I thought was a good shot. It was a little high but I was sure it did the job. Instead of a pass- through shot, the arrow stayed planted in her side. I knew this would present a few problems, but I was still confident. After nearly three hours, I left without finding the deer or even one spot of blood. My disappointment still haunts me; not the disappointment that comes from a missed opportunity, but the kind that comes because shot deer are meant to be found and are meant to supply food for the table. Otherwise it’s a needless death. For nearly three hours I hunted for that one lost and wounded doe. I was not concerned with spooking a buck by rambling around or in getting back into the stand to find another one. I was intent on finding the one that had strayed and was now lost. It was more important to me, for her sake, to leave the others in order to find her. My heart was literally broken when I left unsuccessful.

As I thought about this story that had played out, I was reminded of the story in the Bible about the lost sheep. That story tells about a shepherd who had 100 sheep. One of the little lambs became lost and instead of staying with the 99 that were together, he went after the one that had gone astray. This was the illustration Jesus used to describe God’s desire and love for each of us. The Bible says He sent Jesus to seek and to save those who are lost.

You may think that God wants nothing to do with you because you have wandered away. You may think He has no desire to find one when He has 99 others. But that’s not God’s way. His way is the way of the deer hunter who searches diligently for the one who is wounded, hurt, and lost. His way is the way of persistence. And His heart is broken when the lost are not found.