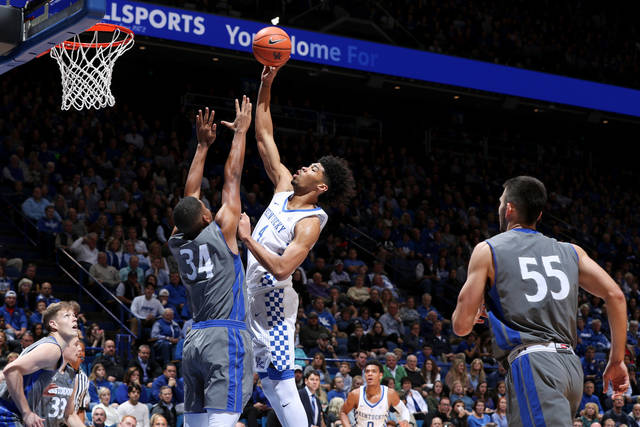 LEXINGTON, (KT) — For the first time this season, Kentucky built a big lead and didn’t back down, cruising to an 86-67 win over Fort Wayne on Wednesday night at Rupp Arena.

Nick Richards paced Kentucky (5-1) with 25 points and 15 rebounds, the first double-double of his collegiate career. Building off a solid first-half performance that included 10 points, the 6-foot-11 forward scored nine points in the first 3:47 of the second half as the Wildcats pulled away from the Mastadons. Richards made nine of 10 shots from the field and connected on all seven of his free throws.

“He was pretty good today,” Kentucky coach John Calipari said. “I was happy with how he was reaching for balls and the stuff he was doing.”

Sparked by the outing by Richards, Kentucky got most of its scoring in the paint with 44 and outrebounded Fort Wayne, 44-21. Richards grabbed 10 defensive rebounds.

“It was a testament to all of the effort he has been putting in and all of the work,” Kentucky forward Wenyen Gabriel said. “He’s put in the work before and after practice and its huge for his confidence in going forward. We all knew he was capable of doing this, but for him to come out and play like he did today, I’m really surprised about that.”

“This is the game of basketball,” Calipari said. “If you think you’re going to struggle, guess what? You’re struggling. The only way, though, that you can build confidence is working harder than everybody in practice. And the second thing is, you can’t have the weight of the world on you and play this game. You got to play like you got nothing to lose. That’s all I’ve been talking about to these guys. Every team that plays us plays like they have nothing to lose.”

Following the visit by Rotella, Richards changed his mindset, especially on game day and it paid off Wednesday night.

“He was the game tonight,” he said. “We couldn’t keep him off the glass. Now it’s hard, the game is moving so fast. It’s difficult to see in live time as I’m watching how our box outs are and where we are. He’s clearly longer than any guy we have on our roster. … He made some shots early playing one on one with our guys. That’s a credit to him, and he got some deep catches. Where he hurt us was on the glass with his length. He totally changed the game with Kentucky. He had a great night. He’s a great player.”

The scoring output was Kentucky’s highest of the season through the first six games, surpassing the 78 points the Wildcats tallied in a win over East Tennessee State nearly a week ago in the Adolph Rupp Classic.

Fort Wayne (3-2) made six of their first nine 3-pointers and forced eight lead changes and a pair of ties before the Wildcats closed out the first half with a 9-0 run and led 45-37 at the break. Despite the impressive start, the Mastadons failed to score during the last four minutes of the half.

Kentucky shot a blistering 70 percent — 19-of-27 — during the first half and got 24 points in the paint. Although shooting wasn’t an issue for the Wildcats, especially in the first half, Kentucky committed 16 turnovers, with 11 of those coming during the opening frame.

Kason Harrell and John Konchar combined for 25 points in the first half and seven of Fort Wayne’s eight shots from long range during the first half. Fort Wayne made just four 3-pointers in the second half. Knochar led Fort Wayne with 19 points, followed by Bryson Scott with 18. Harrell finished with 12 points.

“The zone looked good,” Calipari said. “The zone kind of stymied them a little bit. It’s nice we can go to that thing a little bit if we need to. But we’re still learning.”