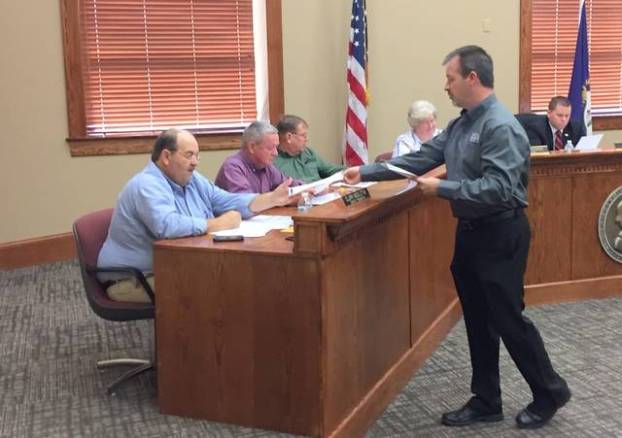 Scott Noel of N3D, a company working with the county on the replacement of the roof at the Harlan County Detention Center, hands out information to the Harlan Fiscal Court during a meeting on Tuesday.

The Harlan Fiscal Court decided on Tuesday to do more research before choosing a contractor for the job of replacing the roof of the Harlan County Detention Center.

The magistrates were prepared to accept a bid for the project when Harlan County Judge-Executive Dan Mosley called on Scott Noel of N3D to advise the court concerning the bids.

“We had six total bids,” Noel said. “Five of them were conforming. One was not conforming, so we ruled that one out,”

According to Noel, the lowest bid was supplied by a company out of Corbin.

Magistrate David Kennedy had a comment about the company which entered the lowest bid.

“They did the roofing on the Tri-Cities Senior Citizen Center,” Kennedy said. “They put that membrane roof on there just like you’re talking about. It’s leaked, and they’ve been there twice to work on it.”

Kennedy said the company was called a few weeks ago about a leak.

“They found two holes on that roof the size of a matchstick,” Kennedy said. “They took pictures of those two little holes and patched them.”

Kennedy said the company advised a bug had caused the holes.

“They charged this county $800 to fix those two little tiny holes,” Kennedy said. “I’ll never vote again to approve a bid by that company because they do not back their stuff up.”

Mosley advised the next closest bidder was asking approximately $4,500 more for the membrane roof.

Noel stated he had no knowledge about the second-lowest bidder, adding the only other company he had experience with was higher.

“We obviously need a roof on that building,” Mosley said. “Scott (Noel) and his team have done a very thorough job in their design and architectural services…the way the bid was written, it says the owner reserves the right to waive any informality or to accept any bid which is deemed most favorable. The owner also reserves the right to reject any or all bids. So, you’re not bound by the way this was advertised to accept the low bid.”

Magistrate Jim Roddy suggested tabling the matter until the court could look into some of the work done by the bidders.

“You have that option,” Mosley said. “They included references in their bids.”

Noel said the references could be checked and the information brought back before the magistrates at.

Mosley mentioned as well as checking references, the court may observe some completed jobs.

After some further discussion, the magistrates passed a motion to table the matter until the next meeting.

With the holiday season upon us, Santa managed to stray from his work at the North Pole just long enough... read more