Bears one win from 5A state finals 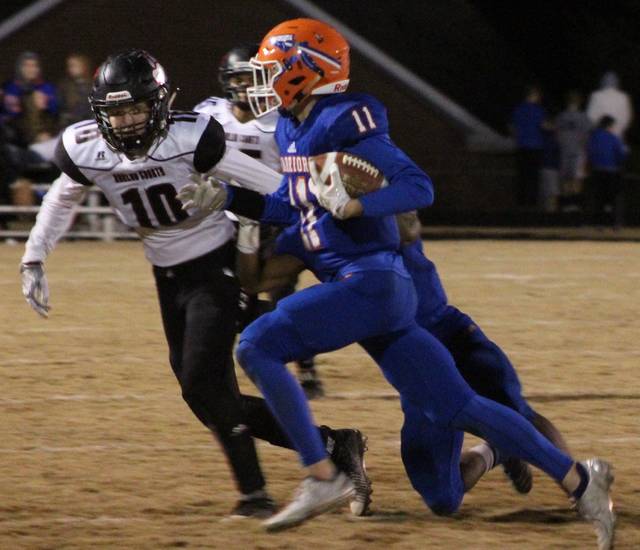 For the fourth straight Friday, the Harlan County Black Bears will board school buses and head north, not knowing for certain if it is the last game they will play this season.

Harlan County (8-5) survived the three previous road tests, winning at Pulaski County, North Laurel and Pulaski Southwestern to capture their third Region 4 title. Their two previous championships (2010 and 2012) were won at home, so the Bears have already tripled the school record of road playoff wins in one season. They face perhaps their toughest test Friday at Madison Southern (10-3), the Region 3 champs who are coming off a 61-20 demolition of Montgomery County last week.

“The way I’m reading my kids is they aren’t ready to go home. I think they’re still hungry,” Harlan County coach Eddie Creech said. “I’ve not see anything in practice that would raise any concerns as far as them being complacent or feeling they have already established all their goals. They know now they are only one game from the state finals. I think most of our kids are Kentucky fans and know they have an opportunity to play an actual football game inside Kroger Field.”

“We’ve got a group of kids who are very close and bonded,” Madison Southern coach Jon Clark said. “There is very much a brotherhood among them and they work hard for each other, than than themselves.”

“Their group has been together since middle school and was the group everybody expected to make a run once they got into high school,” Creech said. “They are senior-dominated and big and strong.”

Senior quarterback Landen Stacy has completed 87 of 149 passes for 1,385 yards and is second in rushing with 726 yards. Senior fullback Carter Smith leads the Eagles’ ground game with 1,083 yards and 15 touchdowns and is first in tackles with 188. Junior lineman T.J. Estes has 71 tackles and has been a matchup problem for most of Southern’s opponents. Junior safety Jordan Casteel has nine interceptions.

“The thing that stands out about Madison Southern is they have such a good mix on offense,” Creech said. “They have the ability to line up and run right at people because they are big. They also have the ability to spread it out with a good screen game and jet game. Our defense has to come to play and be able to defend the run and pass.”

The regional football championship the Eagles won last week was the first in school history for Madison Southern, which opened in 1988.

“For us it’s all about not making the moment too big and playing the way we’ve been playing and do the things we do well,” Clark said.

Senior tailback Quinten Mickens ran for 112 yards and two touchdowns in last week’s win over Southwestern and leads the Bears for the season with 870 yards rushing and 10 touchdowns. Tyrese Simmons has 713 yards rushing and 245 yards receiving on 25 catches. Junior quarterback Colby Cochran has completed half of his passes, 75 of 150, for 906 yards and seven touchdowns. Senior receiver Devon Rodrigues has 41 catches for 527 yards.

Garry Henson and Caleb Carmical lead the HCHS defense with 11 and 102 tackles, respectively.

“They are playing real well and are playing with a chip on their shoulders, given the way they started the season and what they’ve been through,” Clark said. “You can tell they are on a mission to prove people wrong. They also have a great combination of big, physical guys and athletes. They are playing well at the right time and will be a tough opponent.”