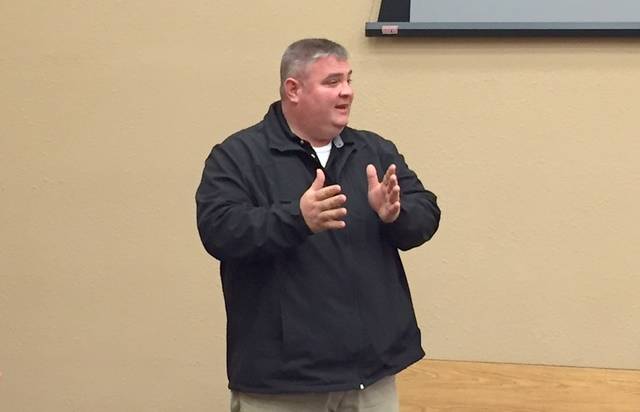 Kentucky State Representative Chris Fugate (R) spoke to the Harlan Fiscal Court about a situation on KY 72 and a new state pension proposal during a meeting on Tuesday.

The Harlan Fiscal Court heard from State Representative Chris Fugate (R) concerning an ongoing problem with a state road as well as a new state pension proposal during a meeting on Tuesday.

“I had asked representative Fugate to come over this morning to take a look at KY 72 going up Catron’s Creek,” Mosley said. “There’s been an issue on that road for the last year or so.”

Mosley explained water has been seeping up through the blacktop, creating an icy road situation when temperatures are below freezing.

“Yesterday morning as a matter of fact, the state had to go out there and salt the road,” Mosley said. “It was as if it has snowed or iced. This all started when they did a project out there and blacktopped up the middle of the road. It’s all happened since that occurred.”

Mosley said the county had been told the road would seal itself off after the asphalt had been down a year.

“It has not,” Mosley said. “This morning, from Teetersville to beyond lower Elcomb, there were a lot of problems.”

Fugate told the court he had spoken to an official with the state highway department about the situation.

“He told us it should have sealed by now,” Fugate said. “We recommended all the ditches be cleaned out, so there was no water in the ditches that could seep onto the road.”

Fugate said he was advised the road would be watched closely to make sure salt was applied when necessary.

Fugate also provided some information about a proposed pension plan for state employees, a topic which has been of interest to many.

“We went back down and we’ve gone through all the bill again, and we’ve fought to take away some changes,” Fugate said. “The House leadership has presented a new proposal to the Senate, and the Senate is looking over it now to see if they can go along with the changes that were made.”

Fugate explained the new proposal does not include a three percent increase in health insurance as well as other increases which kept him from supporting the old proposal.

“It doesn’t save the state as much money, obviously,” Fugate said. “But it does save some money. Hopefully in the next week or so, we’ll know a little bit more.”

• The 2016 unmined coal tax settlement was accepted, subject to audit.