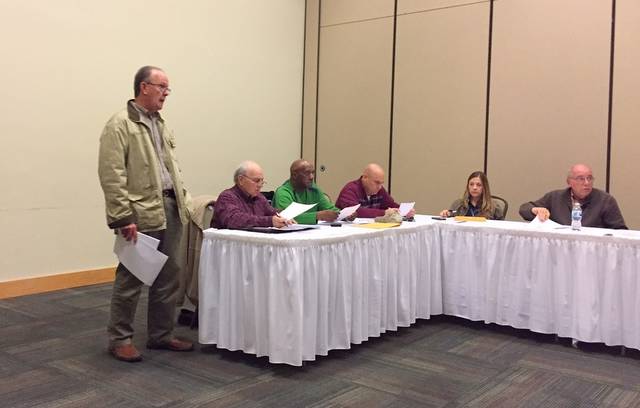 Harlan City Treasurer Charles Guyn presents the financial report to the Harlan City Council during a meeting on Monday.

The Harlan City Council discussed a variety of topics during the panel’s monthly meeting on Monday, including a parking issue.

Mayor Danny Howard recognized a woman, a resident of the Fairview community, shortly after calling the meeting to order.

“We live over in Fairview on May Street,” she said. “We have neighbors who actually have driveways, but they park on the road. It’s a one was street, and they’re parking on the right-hand side of the road.”

She said this situation blocks her driveway and makes driving through the area difficult as the road is a narrow, one-way street. She also mentioned one neighbor had a car on the road on which the tires were flat.

Howard took some personal information from the woman and then addressed the council.

“I will speak to the police and we will go over there,” Howard said. “The car that’s on flats, we will cite that as an abandoned car, and if it’s not moved — I think within 72 hours — we’ll tow it. I will be contacting her back to make sure this is taken care of to her satisfaction.”

No one on the council disagreed with Howard’s course of action.

“We have to find ways to resolve these parking issues as neighbors, and that’s what we’ll try to do,” Howard said.

Howard then asked City Attorney Jason Jackson for his report.

“We got letters out to all the property owners of the abandoned property,” Jackson said. “I think there was about 10 or 15 properties.”

Jackson told the panel the property owners were advised they need to address issues in violation of city ordinances.

In other council activity, the council accepted reports from the department heads.