Cats looking for an upset at Georgia 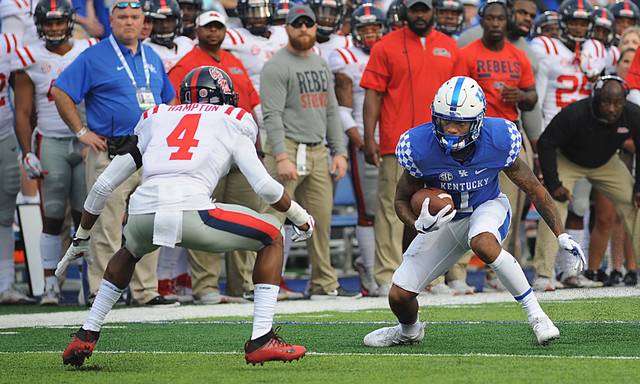 Kentucky freshman Lynn Bowden made a move in the open field against an Ole Miss defender in recent SEC action at Kroger Field. Bowden, from Warren, Ohio and the Wildcats’ top-rated recruit a year ago, has been rounding into form as a receiver and kick returner. In UK’s win last weekend at Vanderbilt, Bowden returned a kickoff 93 yards in addition to catching several passes in the Wildcats’ 41-21 victory.

Here are some things to watch in Week 12 of the Southeastern Conference football season:

GAME OF THE WEEK: Kentucky at No. 7 Georgia (No. 7 College Football Playoff): This is the best game on the schedule in a lackluster SEC lineup, but it could have been a much more meaningful matchup if Kentucky hadn’t blown double-digit leads against Florida and Mississippi . Georgia already has clinched the division title. Had Kentucky hung on against either Florida or Ole Miss, a trip to Atlanta would have been up for grabs Saturday.

MATCHUP OF THE WEEK: Ole Miss QB Jordan Ta’amu vs. Texas A&M’s defense: It’s been a remarkable stretch for Ta’amu, who has a 2-1 record as a starter after taking over for the injured Shea Patterson. Ta’amu has completed 73.5 percent of his passes. He’ll have arguably his toughest challenge when the Rebels host Texas A&M on Saturday — the Aggies lead the SEC with 33 sacks.

NUMBERS GAME: The senior class at No. 1 Alabama (No. 1 CFP) owns a 50-4 record. Those 50 wins put this class one shy of the NCAA record held by Alabama’s 2016 senior class, which went 51-6. … No. 6 Auburn (No. 6 CFP) has scored 301 points in seven SEC games. The only other time Auburn scored over 300 points in SEC competition was during its 2010 national championship season. … No. 17 Mississippi State (No. 16 CFP) has lost zero fumbles on offense this season. The Bulldogs’ lone lost fumble came on special teams. … Kentucky sophomore Benny Snell Jr. already has a school-record 28 career touchdown runs. He’s also the first Kentucky player to rush for 1,000 yards in back-to-back seasons. … South Carolina is seeking its 600th win in program history Saturday against Wofford. The Gamecocks have are 599-572-44. … A victory over Tennessee this week would guarantee No. 21 LSU (No. 20 CFP) its 18th straight season with at least eight wins, a streak that leads all Power Five programs. … Missouri has gained a total of 1,399 yards over its last two games with Tennessee. The Tigers had 659 yards of total offense in their 50-17 blowout of the Volunteers last week.

UPSET WATCH: Ole Miss is a 2½-point favorite over Texas A&M. The Rebels are at home, but have an inferior overall and conference record. Florida is a 10½-point favorite at home against UAB, but the Gators have lost five straight while UAB has won three straight.

IMPACT PERFORMER: Auburn’s Jeff Holland recorded his ninth sack of the season in the Tigers’ 40-17 victory over Georgia last week. He leads the SEC in both sacks and tackles for loss (12). Holland is approaching the Auburn single-season sack record held by Nick Fairley, who recorded 11 ½ sacks in 2010. The only Power Five players with more sacks this season are North Carolina State’s Bradley Chubb (10) and Washington State’s Hercules Mata’afa (9 ½).