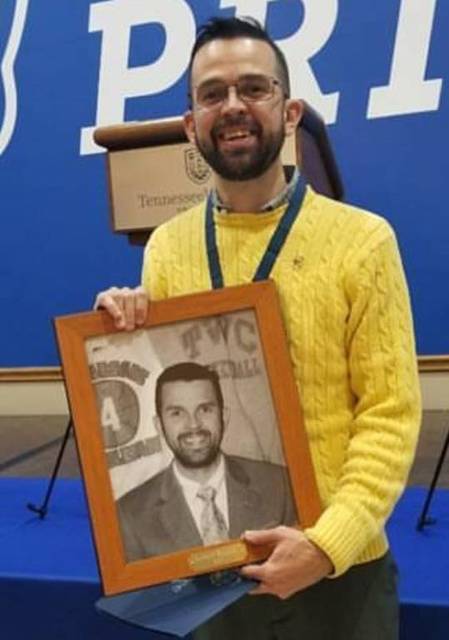 A standout player on three 13th Region Tournament championship teams at Harlan in the 1990s, Nathan Blanton followed his memorable high school career by doing something very few players accomplish on the next level.

Blanton went on to become a star at Tennessee Wesleyan College in Athens, Tenn. He was named to the Tennessee Valley Athletic Conference all-freshman team in 1997, earned all-conference honors in 1998 and 1999 and was the league’s player of the year as a senior in 2000. He was a second-team NAIA All-American that year and finished with 2,008 career points.

His college accomplishments were honored Sunday as Blanton was named to the Tennessee Wesleyan College Athletics Hall of Fame.

“I am very honored to be inducted into the Hall of Fame at Tennessee Wesleyan,” Blanton said. “I will always will be grateful for my basketball careers at Harlan and Tennessee Wesleyan. I had great support from my family, friends and both communities in Harlan and Athens (Tenn.). I had the opportunity to play with some great players and enjoyed every minute of the time I was blessed to play.”

Blanton’s aunt, Kim Kelley, was the first girls player in county history to sign with a Division I school as she went on to UNC-Charlotte after earning all-state honors in 1979 at Cawood High School. Kelley went on to coach at Evarts High School. Blanton’s parents, Jerry and Donna, still live in Wallins. Jerry Blanton was the county’s property valuation administrator for many years and Donna Blanton was a teacher.

Blanton currently lives in Knoxville with his wife, Kelly, a former Tennessee Wesleyan soccer player, and their daughters Zoë, 9, and Mei, 2. He is assistant director of nursing and Cornerstone of Recovery.

LEXINGTON (KT) —Mark Stoops has never had an issue with his team’s performance coming off a loss this season. The... read more