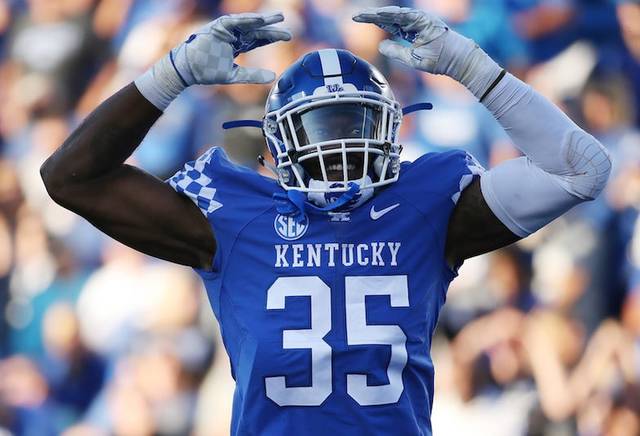 Kentucky’s Denzil Ware was named SEC C0-Defensive Player of the Week, following his performance in a 44-21 win at Vandy last weekend.

LEXINGTON (KT) —Mark Stoops has never had an issue with his team’s performance coming off a loss this season. The Wildcats improved to 3-0 in bounce-back games with a 44-21 win over Vanderbilt last weekend.

“When asked how the team will respond from a tough loss or a blowout loss, my answer has always been the same because that’s what I believe, that it would not be an issue, that leadership is here within this team,” Stoops said Monday. “There’s great pride within this team. And we’re going to go back to work and do the very best we can. It’s not for a lack of effort on anybody’s part, the wins, and the losses. I do like the way we responded this past week.”

The Wildcats (7-5, 4-3 Southeastern Conference), will close out the league schedule Saturday against a Georgia team that had its national championship hopes dashed following a 40-17 loss at Auburn. The Bulldogs (9-1, 6-1) won their first nine games, including six SEC contests, before the blowout loss to the Tigers that dropped Georgia to seventh in the latest Associated Press Top 25 poll.

Although Stoops knows how his team has responded following three losses this season, he’s not sure how the Bulldogs will handle the crushing defeat at Auburn. Stoops added he’s more interest in his own team instead of worrying about the mental state of his next opponent.

“I could never worry at all about what another team’s psyche is (and) I can’t control that,” he said. “I have no idea what they’re doing over there. I just know what I see on film and that’s a very good football team that’s very well coached. I’m worried about us and us continuing to sustain the good things we’ve done this past week and the good things we’ve done all year. And to improve on the areas we need to improve on.”

What Stoops does know, however, is the Bulldogs have drastically improved from last season. Georgia dealt the Wildcats a 27-24 setback last season and has won seven straight encounters between the two SEC East rivals.

“I don’t think there’s any doubt that they’re better,” Stoops said. “I mean, you look at them on film and they’re a very good football team.”

Stoops stopped short of saying his team’s 44-point outing in Nashville last weekend was Kentucky’s best showing in his five seasons as coach but liked the way the Wildcats took care of business to claim the school’s seventh win of the regular season for the first time since 2007.

“I’m not sure if it was the most complete game or not since I’ve been here,” he said. “(I) really haven’t looked at it like that. I do think it was one of our more complete games this year. I thought we did some really good things. We talked about that all week and some of the things that we talked about were that — trying to define what we mean by that edge and that mentality and that preparation.

“We have some things within our building that we’ve done this past week and just briefly, that was about conviction and playing with a great conviction and confidence and then being committed to each other, and our team is good. They’re a good team to coach and they really mean well. It’s just a matter of putting it all together each and every week. We did this past week and hopefully, we’ll build on that.”

Ware recorded three tackles, two of which were quarterbacks sacks – tying a career high. He also recorded his first career interception, one of the team’s four interceptions in the game.

Game-time set: Kentucky’s regular-season finale against Louisville is set for noon on Nov. 25 at Kroger Field. The game will be televised on the SEC Network.