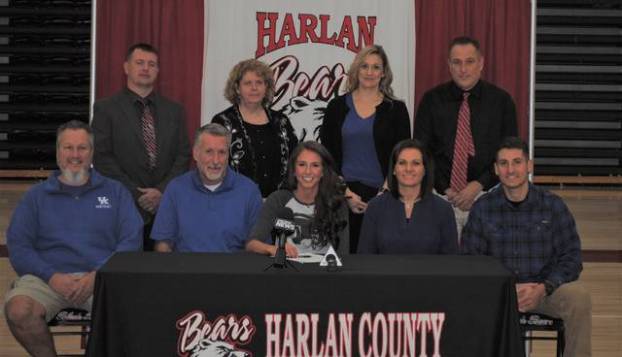 A journey that began in middle school, when she was first identified as a potential Division I basketball player, became reality on Wednesday when Harlan County High School senior Blair Green signed a national letter of intent to play at the University of Kentucky.

“This has been my dream since I was little,” Green said after the signing ceremony, which included family, friends and classmates in the HCHS gym. “This is just amazing. It’s been the biggest dream and biggest blessing.”

The recruiting process for Green began very early in her high school career when Division I coaches from around the nation made regular stops in Harlan County. A leading candidate for Kentucky’s Miss Basketball honors this winter, Green was highly recruited by many major schools, including UCLA, Louisville and Tennessee, but she decided to stay in Kentucky after visiting the UK campus last fall. She already has one close friend on the team in former Bell County Miss Basketball Maci Morris.

“It felt like home,” Green said. “I felt very close to the coaches and liked the chemistry with the team. Maci (Morris)being there makes it better, too.”

At 6-foot-1, Green has the length and athleticism to fill just about any role. That versatility made her even more attractive to colleges.

“I think being able to play multiple positions helped. I think (UK) liked that,” Green said.

UK coach Matthew Mitchell, whose Wildcats also signed Rhyne Howard, of Cleveland, Tenn., on Wednesday, had made Green a priority in his recruiting efforts.

“Blair Green is a player that we have known about for a long time and have had a great relationship with for many years. We are absolutely thrilled that she is officially a Wildcat. She was the first one in the class to commit and we are so excited that she has signed with us. Blair is a player that fits well into what we like to do having a hard-nosed, blue-collar work ethic. She is a gym rat and a great athlete with an outstanding skill set, which is a truly dangerous combination. Blair is a player who has continued to get better throughout her career. She can play numerous positions and is very versatile. We have always valued versatility and always had success with versatile players. She fits in great with our program. She is high character, a great student and has a great family, which are all things that we really, really value.”

Green has scored 1,616 points in her three seasons at HCHS (2,434 points counting two years at Middlesboro when she started on the varsity while still in middle school.) She will likely become the fifth member of the county’s 2,000-point club at some point this season, a group whose first member was Green’s mother, Debbie, when she starred for Harlan in the 1980s before also going on to sign with the University of Kentucky, then moving on to an All-American career at Lincoln Memorial University.

“It was just great satisfaction to see her enjoy her day with friends and family who have watched her over the years. People really don’t understand the commitment and stress it takes for these players to work this hard year round. She was in the gym this morning at 6:15 working and then practice after school,” said Debbie Green, who is also the HCHS coach. “She’s a joy to coach. No matter what, she comes in every day with the same work ethic and she can take hard coaching, which is rare to find. Her dad and I are just really proud of her and are going to enjoy these last few months coaching her.”

In leading the Lady Bears to a 28-3 record last season, including the WYMT Mountain Classic and 52nd District Tournament titles, Green averaged 23.1 points and 7.2 rebounds per game to earn all-state honors. She’s among the favorites for this year’s Miss Basketball award as part of one of the deepest and most talented senior classes in state history.

Before she gets to Lexington next summer, Green would like to close out her high school career in the state tournament. The Lady Bears lost in the regional finals the last two years to Harlan.

Just behind running backs Tyrese Simmons and Quinten Mickens, who have 60 and 54 points, respectively, is a somewhat unlikely... read more