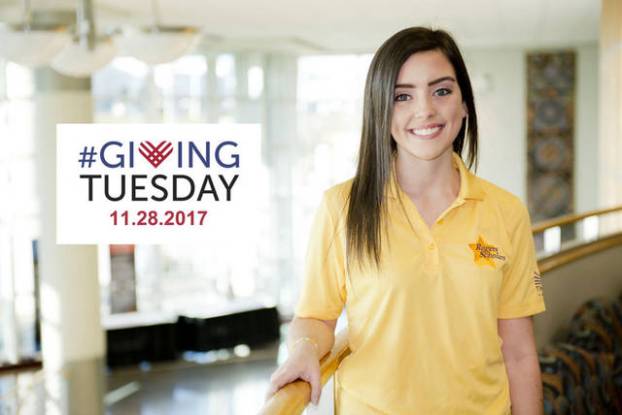 “When I was accepted into Rogers Scholars, I was very nervous,” said Riggins, a junior at Russell County High School. “I was not an outgoing person at all. But by the end of the week, I was not the same person as I was when I entered the program.”

Riggins said Rogers Scholars gave her the confidence to step out and pursue her dreams. The 2017 Rogers Scholars graduate is considering a future career in architecture — all thanks to the leadership and entrepreneurial skills she received as a Scholar.

The Rogers Scholars program is changing lives of high school students, like Payton, throughout Southern and Eastern Kentucky. You can make a difference in the future of the region’s young people by making an online, tax-deductible donation to Rogers Scholars on Nov. 28 #GivingTuesday.

“The Center for Rural Development is proud to be a part of #GivingTuesday, a global day of giving, to support our flagship youth program, Rogers Scholars,” said Natalie Pitman, Associate Director of Charitable Giving and Donor Relations. “We hope you will join us in reaching our goal to raise $5,000 for Rogers Scholars and the youth of Southern and Eastern Kentucky between now and Nov. 28 #GivingTuesday.”

“Without donations, this experience would not be possible for high school students across Kentucky,” Riggins said. “Rogers Scholars is especially important to Southern and Eastern Kentucky, because it gives students in rural communities a chance to go to college through college scholarship opportunities.”

Since the program began, 1,182 high school students have graduated from Rogers Scholars, and potential scholarships valued at more than $7.2 million have been offered to graduates from 17 participating colleges and universities.

The #GivingTuesday donation site is live and ready to accept online donations. Donations may be made any time between now and Nov. 28 #GivingTuesday. To make a tax-deductible donation to Rogers Scholars, go to www.centeryouthprograms.com. Donating is fast and easy.

Riggins said she is thankful to The Center for Rural Development for the Rogers Scholars experience.

“The Center for Rural Development is like a bridge that helps people in Southern and Eastern Kentucky connect to opportunities that they would not have had otherwise,” she said.

Established in 1996 through the vision of U.S. Congressman Harold “Hal” Rogers, (KY-05), and other leaders, The Center for Rural Development is a nonprofit organization fueled by a mission to provide leadership that stimulates innovative and sustainable economic development solutions and a better way of life in Southern and Eastern Kentucky. In its 45-county primary service region, The Center provides innovative programs in leadership, public safety, technology, and arts and culture. The Center is committed to constantly expanding its capabilities in order to deliver a range of key services throughout Kentucky and the nation.