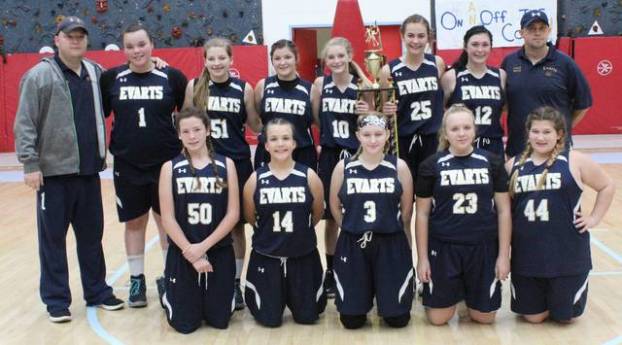 Leading by only four points at halftime of the county seventh- and eighth-grade championship Saturday at James A. Cawood Elementary School, the Evarts Lady Cats were dangerously close to something many of them hadn’t experienced the past three years.

Evarts took control with a 10-2 run to open the second half on the way to a 39-28 victory, completing a 19-0 season. The Lady Cats are 40-0 over the past two years and won all 22 games as sixth-graders for a 62-game winning streak to close their middle school careers.

“The girls came out a little tight, but we’re usually a second-half team,” Evarts coach Tommy Key said. “We knew we’d start our press up in the second half, and not many teams can handle our press.”

After being limited to only one point between them in the first half, Jaylin Smith and Jaylin Preston started the second half with baskets as Evarts took control, building 29-14 lead by the end of the period. In addition to scoring quite a few points off turnovers, the Lady Cats also dominated the offensive glass, led by Alexis Branson and Aliyah Cloud.

“That’s how it’s been all season long, our defense is our offense,” Key said. “I also have some really big girls who dominate the boards.”

Smith and Preston added baskets in the fourth quarter as the lead grew to as many as 17 points.

Branson scored 10 points to lead the Lady Cats, while Smith added nine and Cloud and Preston scored eight each.

Lauren Smith reeled off five straight points to close the game and led Cawood with 12 points. Fifth- grader Kylie Noe kept Cawood close in the first half as she finished with eight points.

Despite his team’s slow start, Key was confident that his Lady Cats would end the day with the championship.

“They weren’t going to lose, no matter what,” he said. “These girls have been in the gym since fourth grade, and we go non-stop. They just want to win. That’s more important to them than anything.”

James A. Cawood raced to a 9-0 lead after one quarter on the way to a 36-11 win over Black Mountain to capture third place.

Conner Roberts ran for four touchdowns and passed for two others as Pikeville reached the end zone seven times in... read more