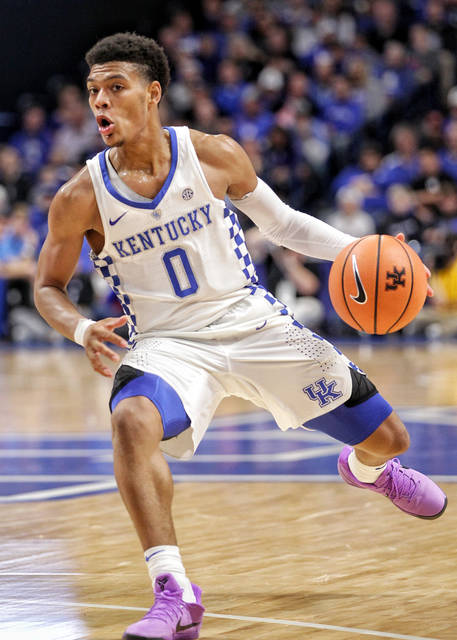 Kentucky guard Quade Green has embraced the competition in practice during preseason workouts. Green and the Wildcats take on Centre College in the final of three exhibition games at 7 p.m. on Friday.

LEXINGTON (KT) — Competition is a good thing and it’s bringing out the best in Shai Gilgeous-Alexander and Quade Green.

The two Kentucky newcomers have been vying for the starting job at point guard during preseason workouts. Although Green is the favorite to succeed De’Aaron Fox, Gilgeous-Alexander has been building his own case behind the scenes, a process Wildcats assistant coach Joel Justus has enjoyed watching since workouts began last month.

“I think (the competition is) a byproduct of two guys that have come here embracing competition,” he said. “They come every day to work, and they enjoy that. They’ve gotten better since they stepped foot on campus in the summer. They didn’t ask questions about who was coming in the process. They didn’t worry about anybody else who might be here. They have come in and it has been a ton of fun to watch them during practice, which no one here or outside of our team and staff get to see. But it’s two guys that absolutely love to play basketball. And love to work and I think what everyone gets to see on game day/night is a byproduct of guys that work hard and want to be the best version of themselves.”

Fifth-ranked Kentucky, which defeated Thomas More (103-61) and Morehead State (92-67) in the first two exhibition games, will play one more tune-up against Centre College before the season-opener against Utah Valley State set for Nov. 10.

The first two exhibitions gave the Kentucky staff a chance to evaluate the roster before next week’s season opener. The Wildcats started two different lineups — alternating Gilgeous-Alexander and Green at point guard — and used a pair of different combinations to to open the second half during both exhibition contests.

As the season-opener draws near, Justus said the coaching staff will keep exploring several different options at all five positions and isn’t sure how long juggling potential lineups will continue.

Overall, Justus said Kentucky’s defense played to its potential during wins over the Saints and Eagles and liked the way the Wildcats distributed the ball offensively. In the win over Morehead State, Kentucky forced 26 turnovers and scored 30 points off those miscues.

“I think we did a good job as a team defensively,” he said. “If you look, we forced turnovers. We were active on the defensive end, and part of that is if you look at the rebounding part, that’s because we caused so many turnovers. That then gave us less chances to rebound. We got deflections. I think individually you saw some guys make some strides positionally on defense, from the film and some of the stuff we emphasized collectively and individually. And I think ball movement was great in terms of our lane touches, in terms of ‘one more’ – some stuff that we chart when the ball gets moving. I think those are the easy ones that jump right off the page at you, and I think you look more for that (Friday) night and the next game and the next game.”

Although undersized, the Eagles held a 30-25 rebounding edge over the Wildcats, which puzzled Calipari.

“He was definitely very upset about it,” Kentucky forward Tai Wynyard said. “He never likes to be outrebounded at all, by any team, so just definitely that was a huge part of the game where he didn’t like. He’s been focusing on that a lot more.”

In order to gain more leverage on the boards, the Kentucky staff has been stressing rebounding from all five positions in practice this week.

“That’s a programmatic stresser for us – everybody should rebound,” he said. “We chart that in practice. We track that in games. Who is even attempting to rebound? And that’s been something that we have talked a lot about probably from our first couple of intrasquad scrimmages here in the building that no one saw and now you have 10 guys that you’re charting in intrasquads – to know it reduces to five in a game.”

Centre College is coming off a rare 14-11 campaign and returns its top four scorers from last season, including Tucker Sine (14.7 points per game). The Colonels were a common opponent for the Wildcats during the pre-modern era and the two teams played 46 times from 1906-29. Centre handed Kentucky its most lopsided loss in program history, an 87-17 setback on Jan. 28, 1910.

Kentucky Hall of Fame broadcaster, the late Cawood Ledford, is a 1946 graduate of Centre College.